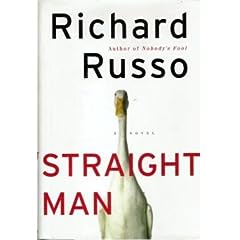 But the 1997 novel by Richard Russo (you may know him better for his Pulitzer-winning Empire Falls) offers some all-too-familiar glimpses into the ugly underbelly of the politics and policies plaguing most organizations.

The laugh-out-loud book (ostensibly a view of middle-aged angst as portrayed by a wise-cracking college English professor) also offers a veritable what-not-to-do HR playbook; take, for instance, these vignettes from the book:

Scene: English chair Hank Devereaux’s anxious staffers had been badgering him for months to share the department’s budget for the upcoming school year; the anxiety was born of rumored drastic job cuts and supposed dead-weight “lists” being compiled by each department chair. Instead of being candidâ€”and explaining that he a) had no idea what said budget would be and b) had no such listâ€”Devereaux responded to his team’s pleas with ill-timed jokes â€¦ and a dramatic gesture.

As local TV news crews descended on campus for a dedication of a new academic building, sited next to a pond inhabited by geese, Devereauxâ€”after getting into altercation with a particularly aggressive goose and an equally strong-willed colleague who suggested the English department was a particular target of administrators â€” grabbed the aforementioned goose (which he nicknamed Finny after an English professor) by the neck, raised him aloft, turned to the cameras:

I explain that I don’t, even at this late spring date, have a budget for next year that will allow me to hire the adjunct staff I need to cover freshman composition courses next fall. Despite the fact that the university has committed millions to a new building project . . .

“So here’s the deal,” I shout. I need to shout if I’m going to be heard over Finny’s strangled trumpeting and the crowd’s applause. “Starting on Monday, I kill a duck a day until I get a budget. This is a nonnegotiable demand. I want the money on my desk in unmarked bills by Monday morning, or this guy will be soaking in orange sauce and full of cornbread stuffing by Monday night.”

Lesson: Those at the top must communicate often and communicate openly â€” especially when it comes to bad news â€” and if you can’t share all the details, explain that, and explain why, and tell employees when you’ll be able to be more forthcoming. Failure to do so could, PETA forbid, result in mortal danger to both animals (human and otherwise) and the organization.

Scene: An English department meeting to rank external candidates for the chairperson position. The only untenured professor present is Campbell Wheemer (who has no use for literature, preferring to study his feminist critical theory by way of television sitcoms). Whenever a male pronoun is used in discussion, Wheemer quickly jumps in with “or she” â€” an affectation that prompts his colleagues to refer to him as “Orshee”:

“I think we should eliminate both male candidates,” Orshee offered.

“Are you suggesting that we not consider male candidates?” Teddy wondered. “Simply on the basis of gender?”

“That would be illegal,” Teddy said, but his voice didn’t fall quite right, leaving an implied “wouldn’t it?” hanging in the air.

“Still, it’s not the procedure we followed when we hired you,” Finny reminded him.

. . .”You should have hired a woman,” Orshee continued. He seemed on the verge of tears, so deep were his convictions in this matter of his having been hired over a qualified woman. “And when I come up for tenure, you should vote against me. If we in the English department won’t take a stand against sexism, who will?”

Lesson: It is possible to be too politically correct â€” don’t let the “Orshees” in your organization cloud practicality.

Scene: The same meeting as mentioned above. Twentieth century literature professor Gracie DuBois (who also recently desktop-published a volume of her poetry) is fearful of rumors that positions will be cut and unsure where she stands with her superiors. Thus, she objects to the inclusion a candidate who happens to be a 20th century literature scholar and a poet:

“We’re already overstaffed in Twentieth Century,” she reminded us. “Also we have no demonstrated need for a second poet.”

. . .”Do we already have a poet?” I heard William Henry Devereaux, Jr., inquire innocently.

Minutes later, DuBois reiterated that the department did not need another Twentieth Century scholar, nor another poet. “Who’s our first poet? â€¦ Someone remind me,” Devereaux asked again.

“The spiral notebook caught me full in the face with enough force to bring tears to my eyes. â€¦ But what confused me was the fact that the notebook Gracie used remained, unaccountably, right in front of my face. â€¦ Only when I realized Gracie was in fact trying to retrieve her notebook, and that each tentative tug sent a sharp pain all the way up in my forehead, only then did I realize that the barbed end of the spiral ring had hooked and punctured my right nostril, that I was gigged like a frog and leaning across the table toward Gracie like a bumbling suitor begging a kiss.”

Lesson: If tensions are so high that someone is likely to be maimed by spiral notebook, you’ve let things slide for too long. Look into conflict resolution pronto. To avoid such acting out in the future, hold regular performance reviews which include detailed and actionable goals.

Scene: Devereaux buzzes his receptionist, Rachel, on the intercom:

“Let’s take a long lunch. We’ll drive out to the Railton Sheraton. If we’re together there won’t be anybody to take these messages.”

“What sort of food do they serve at a sexual harassment lunch?” it occurs to me to ask.

Lesson: Sexual harassment is a serious issue â€” one that likely can’t be tackled by a luncheon. Where there’s food, there’s little attention paid elsewhere. (Forget about the fact that the “secretaries” are undoubtedly not the ones in need of required sexual harassment training.)

The cringe-worthy lessons contained in Straight Man go on and on â€” but I’ve already done exactly that. If you’re looking for a break from the typical business book, I suggest you pick up a copy and read it yourself. At the very least it will make you realize that no matter how bad things might look at your organization, it could be worse.

Sarah McAdams writes the popular “Balancing Act” and “Office Watch” columns for HR Insight. Sarah has reported on human resources for a variety of publications, including the Journal of Employee Communication Management, Corporate Legal Times and The Ragan Report. She has written about many other subjects for publications like the Chicago Tribune, Montreal Gazette, Orlando Sentinel, Self magazine and Daily Variety. McAdams also helped ghostwrite the book Portfolio Life: The New Path to Work, Purpose, and Passion After 50 by David D. Corbett (Jossey-Bass, 2007).