They’re showing up in e-mail signatures and personal introductions—a quick listing of pronouns such as she/her/hers or they/them. Those small words sprinkled in conversation and written communication to take the place of the seemingly more important nouns is gaining in importance as employers address gender identity in the workplace. 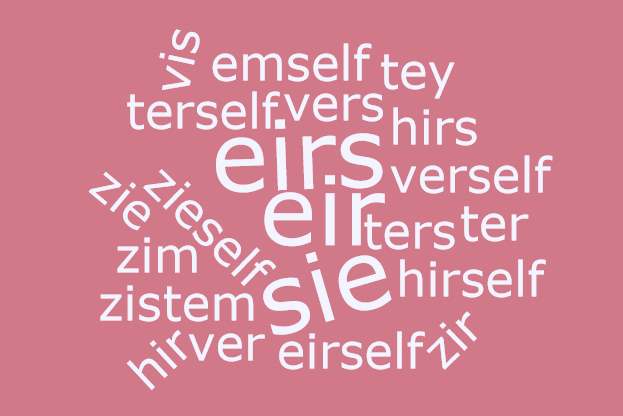 Although many don’t understand why pronouns deserve so much thought, others see careful use of words as an important way to make the workplace more accepting of those not comfortable using traditional male-female pronouns.

Indeed, many employers are addressing pronouns as part of their diversity and inclusion efforts. A recent report in Quartz tells of gender-identity guidance in place at the financial services and investing company TIAA. Company guidelines counsel employees to “Never assume someone’s gender identity.” It even advises employees to ask clients what pronouns they want used and/or to share their own with an introduction such as “Hello, my name is Jane, and my pronouns are she/her. It’s very nice to meet you.”

The focus on pronouns as part of employer diversity and inclusion efforts is relatively new, and most employers aren’t yet addressing the issue, Jessica L. Meller, an attorney with Saul Ewing Arnstein & Lehr LLP in Philadelphia, Pennsylvania, says.

Meller, who includes the line “Pronouns: She/Her/Hers” in her e-mail signature, expects the focus on the issue to become more common over time. “At this point, larger employers in major metropolitan areas and LGBT-owned businesses comprise most of the demographic that have adopted this practice,” she says.

Although addressing pronouns usually is seen as a way of communicating an employer’s tolerance for employees and customers who identify as nonbinary or gender fluid, employment policymakers should take care in how they broach the subject, Meller says.

The purpose of the practice is to create a safer and more inclusive work space so that those whose gender identity corresponds with the sex they had or were identified as having at birth don’t mis-gender others. “When one employee mis-genders another, it’s an uncomfortable experience for both,” Meller says. “It can even be traumatic for the employee who is mis-gendered. When employees designate their pronouns and ask others for theirs, it reduces the likelihood that mis-gendering will occur, creating a safer and more inclusive environment for everyone.”

Meller encourages employers to incorporate pronouns into their diversity and inclusion training. “More and more diversity training consultants are including gender and pronoun components in their corporate trainings,” she says. “Employers also can encourage their employees to add their preferred pronouns to the signature line of their e-mails. This is a growing practice in many industries.”

Meller says in some workplaces, employees start meetings by introducing themselves by name and identifying their pronouns. “In short, there are a lot of free and basic practices employers can encourage to make the workplace more inclusive for folks who may identify as transgender or gender nonbinary.”

Tara Z. Hall, an attorney with the Davis Brown Law Firm in Des Moines, Iowa, recommends using neutral language in workplace policies. “There is rarely a reason to segregate by gender,” she says. Many people use pronoun identifiers as a signal of inclusion, but she doesn’t recommend asking individuals if they have specific pronouns unless everyone is asked.

“Like any policy, if you make assumptions, you may end up insulting or engaging in discriminatory behavior,” Hall says. “The best course of action is to create a workplace with a strong inclusion culture so that individuals who may transition during their employment or who are mis-gendered are able to resolve those issues in a satisfactory way.”

In an effort to use gender-neutral pronouns, some have turned to using they, them, and their instead of he, she, him, her, his, or hers. In addition to running into what many see as a grammar error, there can also be confusion over whether the pronouns refer to one person or a group. Nevertheless, it’s one way some prefer to get around the gender-specific problem.

Other gender-neutral pronouns have been devised in recent years. A September 28, 2018, blog entry on hubspot.com includes the following list:

If you want more information on addressing diversity, join us on November 14 in Nashville, Tennessee, at HR Comply 2019. A session titled “Eradicating Unconscious Bias: How to Build a Diverse Workplace and Equalize Hiring, Pay, and Performance-Based Decisions” will be presented by Brad Federman, F&H Solutions Group, and Dinita L. James, Esq., Gonzalez Law, LLC.