Being overqualified for a position is automatic grounds for declining a job candidate, right? Wrong! Despite misconceptions, overqualified workers bring many benefits to the workplace. 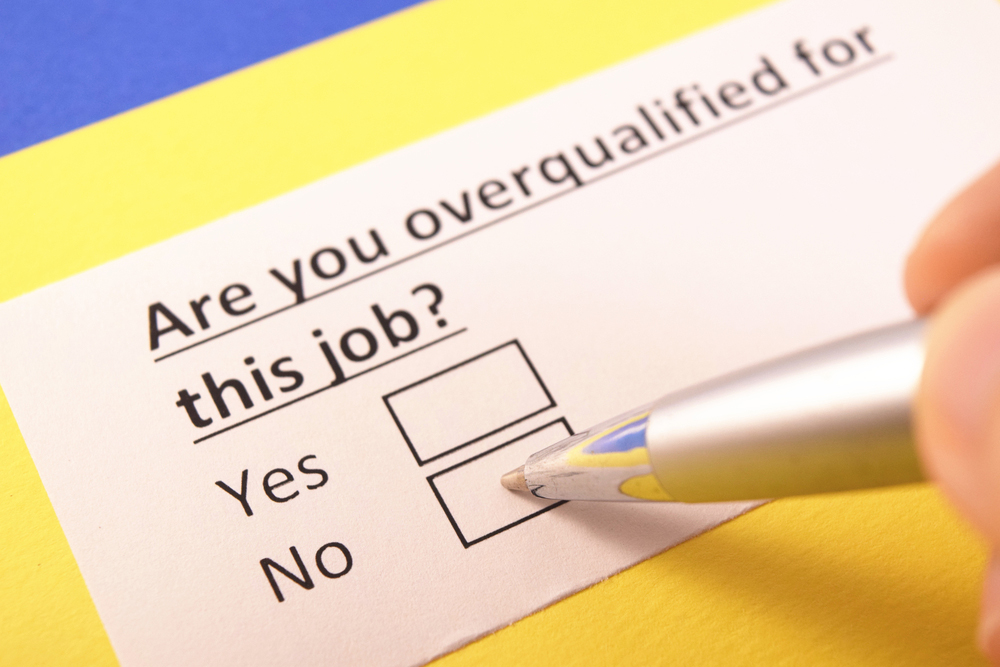 In a recent article in The Wall Street Journal (WSJ), Columnist Sue Shellenbarger discussed how jobseekers could be labeled as “overqualified” at any point in their career and explained why employers are hesitant to hire these workers. She discussed a recent study that focused on a candidate’s level of experience and his or her commitment to the employer.

The study found that managers were more likely to offer a less qualified candidate a job over an overqualified candidate. Citing the study, Shellenbarger says, “The managers assumed the candidate with the stellar résumé wouldn’t be as committed to the company or stick with the job as long as the other applicant, the researchers found.”

In a candidate-driven market, finding skilled talent to fill the void is a struggle for many employers, which makes us wonder: Are you overlooking “overqualified” workers because of the “stigma” that comes with hiring them?

Video interviewing platform Spark Hire recently released the report “The Risks and Rewards of Hiring Overqualified Talent.” The report covers the pros and cons of hiring overqualified candidates, which are outlined below.

When someone says, “I have good news and bad news. Which would you like to hear first?” I always go for the bad news and hope that the good news outweighs whatever bad news I’ve just heard. So, with that being said, we’re going to cover the cons of hiring overqualified candidates because I’m sure once you learn about the pros, you’ll forget the cons!

According to Spark Hire, “More than half (54.7 percent) of our respondents stated overqualified employees are more likely to leave for another job.” This also confirms the research Shellenbarger cited in her WSJ article, but again, we are covering the cons first, so fear not.

For overqualified candidates who actually stick it out, Spark Hire found that they’re more likely to “frequently request promotions and raises (31.1 percent) or grow bored and underperform (35.3 percent).”

Additionally, “31 percent of respondents believe overqualified employees lead to lower employee morale—most likely a result of the perception that overqualified talent has a sense of entitlement (25.6 percent).” Spark Hire also found that “another 31 percent say they hurt overall employee retention.”

While overqualified candidates may lower office morale and continually ask for promotions or raises, there are many benefits that outweigh these risks.

While the cons may be a turnoff for some employers, a vast majority of Spark Hire survey respondents (87.2 percent) say they would hire an overqualified candidate, as they all agree that these candidates provide many benefits to the company.”

Over half “(52.3 percent) of those respondents who currently employ overqualified talent stated these employees provide valuable skills that expand the role beyond the job description.” And what skills might they bring, you ask? According to Spark Hire:

While a little under half of respondents say these types of workers are equally as engaged as other employees, over a quarter (27%) say overqualified employees are actually more engaged than other employees.

How to Determine if Overqualified Talent Is a Good Fit

Now that you’ve heard the pros and cons, are you convinced that you can and should hire these workers? Spark Hire discovered that a whopping 91.3% of employers admitted the talent shortage has influenced their decision to hire an overqualified candidate. So, if you’re in the same boat, maybe it’s time to look past the preconceived notions and hire overqualified workers today!

If you’re convinced, Spark Hire offers a few tips on what you should look for (or ask) during the interview process:

Coincidentally, in Shellenbarger’s WSJ article, all the recruiters and jobseekers she interviewed shared these same tips.

“Highly qualified applicants must be prepared to give evidence that they’ve done similar jobs in the past,” says Mark Phillips, chief executive of Sanford Rose Associates/HireEducation, a Boulder, Colorado, recruiting firm.

“You have to have a compelling reason why the needs of this business and this job are right for you, and about what you can bring to the role,” says Lorraine Vargas Townsend, a jobseeker who was recruited to work in a senior position at a Boston-based tech company.

If a candidate can successfully connect the dots and demonstrate how his or her past can work for your company’s future, then you should definitely consider hiring that overqualified candidate.

Hiring Overqualified Talent During a Recession

“Considering 70.7 percent of hiring professionals agree the number of overqualified talent in today’s job market complicates filling entry-level roles, according to our recent research, it’s safe to assume these circumstances would only increase during a recession,” Tolan says. “While more talent will pour into the open market due to layoffs, those candidates will also be highly-skilled and experienced compared to the overqualified talent already entering the workforce.”

“Their overqualification also means they have the ability to train other employees on new skills or to perform those same tasks,” adds Tolan. “Companies have the opportunity to save money during a recession by hiring overqualified talent who would be satisfied in their roles and potential career path. If they can see the light at the end of the tunnel, companies have a greater potential to be left with employees who see a future with the company when the recession ends.”

“During a time of recession, ensuring overqualified talent would be satisfied with the organization long-term is hyper-critical because companies simply can’t afford to go through the hiring process more than necessary. Even at the best of times, we found, of companies with a hiring budget of less than $1,000, only 63 percent of hiring professionals reported their cost-per-hire was less than $1,000 last year,” he concludes.

Hiring College Graduates During a Recession

As we head into a new school year, it makes you pause and reflect on the recession of 2008. Many college seniors graduated during the Great Recession and were stuck competing with overqualified candidates in order to land a job. Tolan also explains the expectations of new college grads vs. the reality of today’s labor market. He offers a bit of advice for recruiters looking to recruit college grads during a recession.

“Recent college grads have high salary expectations. We’re not currently in a recession and the average undergraduate still expects to make over $10,000 more than the national median salary from the time they graduate until they have five years of experience, according to a recent Clever report,” he says.

“While their expectations are high, younger candidates are generally more persuadable. Based on where they are in their life: planning for marriage, starting a family, buying their first home, they’re more likely to lower their salary expectations than more experienced talent that has an established cost of living and life circumstances,” Tolan shares.

“Unfortunately, during a time of recession, this gap between salary expectations and reality will only widen regardless of college graduates’ lifestyle and trajectory,” he adds.

Tolan shares this advice for talent acquisition professionals: “Recruiters must focus on other concrete details and benefits of the role. Show them how their futures will flourish from the opportunities your company provides by creating a clear path with their goals in mind.”

Whether a recession will happen remains to be seen, but if it does, keep Tolan’s thoughts in mind. And also, don’t discount overqualified candidates just yet—they may end up surprising you!