Whistleblowing has been front-page news in recent weeks. As an impeachment investigation roils the nation, we’ve heard debate about the handling of confidential complaints, speculation about the whistleblower’s identity, and discussions of the validity of the claims. What we haven’t heard, at least not yet, is a report from the whistleblower that he’s been retaliated against for blowing the whistle. If the system operates as it’s supposed to, that will never happen. 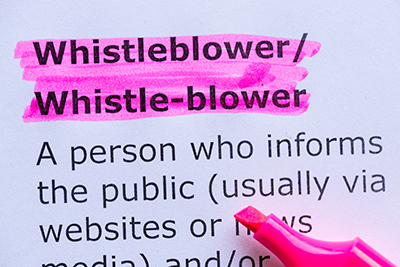 The situation in Washington is far less common than what usually happens with whistleblowing in the workplace. The usual scenario goes something like this: An employee whose identity is known complains about something he considers to be wrong. The employer investigates and either finds the complaint has merit and corrects the problem or deems the complaint unfounded.

That was the situation a California Court of Appeal addressed in a recently published decision that serves as an important reminder of the way whistleblower protection works in California.

Todd Hawkins and Hung Kim worked as part-time hearing officers for the Parking Adjudication Division of the Los Angeles Department of Transportation (LADOT). Their job involved hearing appeals from people who got parking tickets.

Hawkins had clashed with his supervisor, Carolyn Walton-Joseph, for years. She claimed he was doing things wrong and being insubordinate, and he complained about what he viewed as her poor management. In August 2011, after they had an altercation, LADOT assistant manager Robert Andalon asked HR to discipline Hawkins, but no action was taken until years later.

Meanwhile, Hawkins, Kim, and other hearing officers began reporting that Walton-Joseph and another supervisor, Kenneth Heinsius, were pressuring them to change their decisions about parking tickets. Over a period of about 2 years, 14 hearing officers, including Hawkins and Kim, complained to Andalon and other LADOT officials about the pressure being exerted by the supervisors and about their abrasive management style. Eventually, Andalon commissioned an internal investigation.

In September 2013, the investigator issued a report finding that Walton-Joseph and Heinsius had pressured the hearing officers to change their decisions but hadn’t abused their authority in doing so. On October 8, Andalon determined there was insufficient evidence to support the allegations against Walton-Joseph and Heinsius. He considered the matter closed, but Hawkins and Kim did not. They escalated their complaints outside LADOT to the city ethics commission and the city council.

On November 19, 2013, the city fired Hawkins, purportedly in fulfillment of Andalon’s August 2011 request that he be disciplined for the altercation with Walton-Joseph. A month later, on December 23, the city fired Kim, purportedly because of his conduct at hearings in May and June 2013. Not surprisingly, Hawkins and Kim sued.

California’s whistleblower protection law, Labor Code Section 1102.5(b), prohibits an employer from retaliating against an employee “for disclosing information . . . to a government or law enforcement agency, or to a person with authority over the employee or another employee who has the authority to investigate, discover, or correct the violation or noncompliance, . . . if the employee has reasonable cause to believe that the information discloses a violation of state or federal statute, or a violation of or noncompliance with a local, state, or federal rule or regulation.”

Hawkins and Kim sued under Section 1102.5(b) as well as under California’s Private Attorneys General Act (PAGA). They also filed claims for race discrimination. The jury rejected their discrimination claims but found in their favor on the whistleblower and PAGA claims.

Court of Appeal Didn’t Buy It, Either

The California Court of Appeal concluded Hawkins and Kim had proven their threshold case: Their complaints about the parking tickets fit squarely within the whistleblower law, they obviously suffered an adverse action (termination), and the timing alone was enough to suggest a causal link between the two.

However, the court noted: “Even if we found that a long period elapsed between the protected activity and the terminations, a causal connection between them would still be established so long as the city engaged in a pattern of conduct consistent with retaliatory intent.”

The court cited examples of a pattern “consistent with retaliatory intent,” including Heinsius requiring Kim to get a doctor’s note after a 1-day illness and both supervisors issuing numerous counselings to Kim and Hawkins over a 2-year period. The court acknowledged that the city had put forth legitimate nonretaliatory reasons for the terminations and that Hawkins and Kim had the burden of proving the city’s explanation was pretextual, or a cover-up. And the court recognized that it wasn’t enough for them to merely show the employer’s decision was wrong, mistaken, or unwise.

Instead, they had to “demonstrate such weakness, implausibilities, inconsistencies, incoherencies, or contradictions in the employer’s proffered legitimate reasons for its action that a reasonable [fact finder] could rationally find them unworthy of credence, and hence infer that the employer did not act for a [nonretaliatory] reason.”

The court ruled that Hawkins and Kim met that high bar. Although only a short amount of time had lapsed between their whistleblowing and their terminations, that was offset by the fact that the city tolerated their misconduct for a long time.

Rejecting the city’s explanation that the delay was simply due to a backlog in HR, the court observed that Hawkins and Kim had been allowed to continue working throughout the period they supposedly engaged in misconduct—and that Kim had received a performance evaluation in which he was rated “competent.”

Don’t retaliate against whistleblowers. To state the obvious: There should be no retaliation against an employee who blows the whistle—even when he is mistaken about the perceived violation, and even when he persists after being told that. As tempting as it may be, retaliation must not be countenanced.

Don’t put off until tomorrow what really should be done today. It’s a mistake to put off disciplining or terminating an employee who misbehaves or whose job performance is unacceptable. When an employee engages in whistleblowing (or any other protected activity), the timing of a subsequent adverse employment action cuts both ways.

Although acting quickly will create an inference of retaliation, dragging things out doesn’t eliminate the risk. Tolerating misbehavior or poor performance for any length of time makes it harder to prove the employee’s misconduct or unacceptable performance is what motivated the adverse action.