A critical part of building a quality company culture involves how you handle feedback. When people feel heard, they become more engaged at work. Many approaches toward building a quality feedback program have been attempted. Today, we are going to discuss the concept of an open feedback environment with an expert. 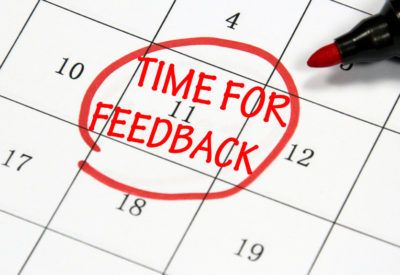 HR Daily Advisor: Professionals have been “doing” feedback for a long time. How have they been doing?

Edwards: Professionals are used to feedback in the sense that they have always put high value on a good reputation. There is nothing new about feedback. I would argue that being open to feedback is an essential part of having a professional attitude toward your work.

Many established feedback practices are valuable and worth retaining. Also, many professional organizations take a reflective approach—the individual might say what he or she wants to achieve in a particular period, and then later, that person reflects on how he or she did in relation to that plan and how he or she changed.

Mentoring also helps people focus on developing their skills and talents and improve their performance. We want to move away from having a “blame culture” at work. We need to empower people to make decisions because inevitably, people will make mistakes.

However, not making decisions is worse and creates bottlenecks. It’s about understanding the decision-making process, not just the outcome. Many successful outcomes are due to poor decision-making, and many poor outcomes happen for the right reasons. We must never not make decisions. Feedback is actively sought and given.

HR Daily Advisor: What is an open feedback environment?

Edwards: An open feedback environment is where people aren’t afraid to immediately share where things are or aren’t working out. People should discuss how to adjust plans to make them work better in the future.

The focus is on achieving the outcomes that have been agreed upon and improving business performance rather than focusing on individual efforts. Having a “feedback culture” is really about trying to be more responsive to what is working and what is not.

In the past, feedback on an organizational level was often in the form of a performance review every few months, which is pretty infrequent, and organizations can do better. An open feedback environment can help make these improvements and welcome conversation.

HR Daily Advisor: A culture of feedback may seem alien to those who don’t have one. How would you describe such a culture to them?

Edwards: A culture of feedback is an environment in which people ask for advice when they need it and don’t feel it weakens others’ perception of them. Conversely, giving advice when it isn’t asked for can be counterproductive. We need a balance. We achieve this balance by focusing on how decisions are made rather than on the outcome.

People improve by analyzing why they acted the way they did rather than analyzing whether the outcome was perceived as successful. For example, agile organizations tend to work in shorter cycles—such as 2-week sprints. Each sprint ends in a review, during which the team can celebrate success but also look at where they didn’t achieve what they set out to—not in the spirit of blaming anyone but rather looking at how they can work together better next time.

People tend to be too ambitious about what they can achieve in a given time. Learning to set realistic goals as a team is very important and plays into creating a feedback environment.

HR Daily Advisor: What happens when organizations create feedback initiatives because they know it’s important but don’t support them with a system for taking action based on that feedback?

Edwards: If you don’t “sell” to people the fact that you are listening to feedback by taking action, then it all falls apart. More positively, if you do, then people really embrace the fact that they need to get engaged, as well.

A feedback loop has to happen throughout a company to be successful and have these conversations. If feedback isn’t used to iterate and replan in accordance with what did and didn’t work last time, then business performance won’t improve overall.

HR Daily Advisor: How does an organization make sure that two-way feedback occurs?

Edwards: Feedback should be approached (and taken) in the same way no matter a person’s level. It has to work for everyone involved, or it won’t be productive. Managers should participate in feedback discussions and be open to hearing what they can do in the future to positively impact their team’s performance and change for the better.

Similarly, junior staff should be open to giving and receiving feedback in order to learn what will be best for future decisions.

HR Daily Advisor: Can a successful feedback environment work even if a few key players are not on board? Can they be converted or circumvented?

Edwards: It can work, but it won’t be as successful as if everyone were embracing it. But, something is better than nothing! In any change, people are likely to feel resistant or have concerns.

Therefore, it is important to be open to discussing these concerns. It helps to have champions of the new process in every department to explain the benefits of the change and lead the charge in implementing a feedback environment.

HR Daily Advisor: What is the most important thing to do to win over skeptics and show that the environment you are trying to build is real and here to stay?

Edwards: Lead by example. Too many managers create initiatives they don’t follow but expect others to. Feedback is really just part of a mind-set that is open to learning the lessons of what is and isn’t working on the ground. It’s important to show people you’re invested.