The 2020 election season is heating up. These days, political tension seems to spread like wildfire, and the workplace is no exception. The American Psychological Association estimates that one of every four employees was negatively affected by political conversations at work during the 2016 election. 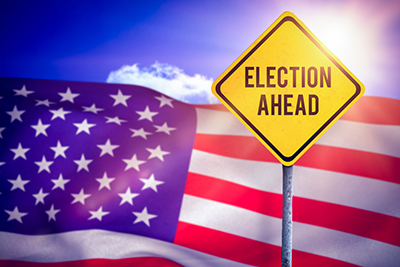 No doubt, politics will spread into the workplace again this year, causing friction between employees. Here are three ways private employers can help keep the peace this election season.

Please note: The tips below are for private—not public—employers. The distinction is important because public employers are subject to the First Amendment of the U.S. Constitution, which prohibits the government from abridging the freedom of speech, but private employers are not. This article addresses only political speech restrictions in private employment.

The First Amendment protects against only government restrictions on speech. That means it doesn’t prohibit private employers from placing reasonable workplace restrictions on political speech. For example, you may limit political discussion to break times, or direct that company property (such as e-mail) cannot be used for political purposes. In short, employees shouldn’t use company time or resources for political campaigning.

Importantly, the National Labor Relations Act (NLRA) protects a subset of political discourse at work—speech related to unionization and collective bargaining. You cannot interfere with or restrict employee speech regarding wages, hours, and union rights, even if it gets political.

For example, you shouldn’t prohibit an employee from discussing union issues or wearing union buttons at work. This is the case regardless of whether there’s an active collective bargaining agreement in place. The NLRA protects all private employees, not just those with an active union presence.

It’s a federal crime to intimidate, threaten, or coerce a person for the purpose of interfering with her right to vote. Many states have similar laws. Thus, you cannot threaten an employee’s position or pay to induce certain voting behavior. Indeed, you should be careful not to exert any type of pressure on employees to vote (or not vote) a certain way.

For example, promotions and other benefits shouldn’t be conditioned on voting behavior. And managers shouldn’t push their subordinates to support a certain political candidate.

Indeed, management should steer clear of political conversations at work altogether because a political comment could give rise to a discrimination claim. In other words, political speech to one person could seem like harassment to another.

For example, Title VII of the Civil Rights Act of 1964 prohibits workplace discrimination based on religion, national origin, race, color, or sex. The hot-button issues of our day—such as immigration or health care—may intentionally or unintentionally provoke discriminatory commentary, such as, “You only believe X because you are Y race/religion/gender.”

Federal law doesn’t prohibit discrimination based on political belief. But about half of Americans live in states that prohibit private employers from disciplining or firing employees for their political beliefs or affiliation.

Promote an Environment of Respect and Civility

Fundamentally, private employers should promote an environment of respect and civility and keep political conversations to a minimum at work. Management should be trained to avoid engaging in political discussions with their reports because employees may feel pressured or discriminated against because of their beliefs or protected status.

You should update your policies to clarify that employees may engage in political activities on their own dime and time (except for collective bargaining). You may also wish to update your antidiscrimination policies or provide sensitivity training.

By cultivating a culture of respect from the top-down, you can turn down the heat this election season and create a workplace where employees of diverse backgrounds and beliefs feel welcome for years to come.

Sarah Stula is an employment and litigation attorney with the law firm Foulston Siefkin LLP in Kansas City, Kansas. She enjoys researching free-speech issues and discussing politics while taking long walks with her goldendoodle. She can be reached at sstula@foulston.com.