Everywhere we turn, store fronts and restaurants are posting signs seeking applicants for vacant positions. And the phenomenon isn’t limited to just the service industry. Employers in the transportation, logistics, and manufacturing sectors are just as desperate for applicants. 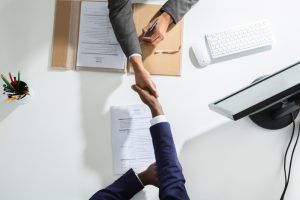 One suddenly hot recruiting tool is paying signing bonuses to new employees. But there are some factors you need to consider before offering the bonuses.

According to a recent article in The Wall Street Journal, “Nearly 20% of all jobs posted on job search site ZipRecruiter in June offer a signing bonus, up from 2% of jobs advertised on the job search site in March. The states with the highest shares of job listings that include a signing bonus are Iowa, Missouri, Vermont, Wyoming and Arkansas, according to ZipRecruiter labor economist Julia Pollak.”

Signing bonuses of $500 to $1,000 are becoming increasingly common for hourly workers. But going forward, you should exercise caution.

Applicant Shortage May Be Short-Lived

You should approach new hire bonuses deliberately and exercise due caution. First, the immediate worker shortage may be only temporary. Expanded unemployment benefits that have been available to help people weather COVID-19-related layoffs often have been so generous that they now serve as a disincentive for people to return to work.

In Arkansas for example, coupling the federal supplemental benefits of $600 per week (later reduced to $300) with the state’s standard benefits of up to $454 per week resulted in many hourly workers receiving more in unemployment benefits than they were earning by working. That’s especially true when you consider the savings associated with (1) not needing childcare while parents and children stayed home and (2) avoiding travel expenses related to going to and from work.

Notably, the benefits are coming to an end. Many states are refusing to continue the federal unemployment benefits. They’re also requiring more strenuous efforts from the unemployed to seek new jobs in order to maintain their eligibility for even the standard state jobless benefits. Thus, you may want to consider that any current shortage will be temporary and fade in the next few months as the unemployed must return to work.

Consider the impact the sign-on bonuses could have on your current employees. Deep resentment could occur if loyal employees who worked through the crisis become aware you aren’t providing them with the bonuses you’re offering to new hires. Will you have to extend the bonuses to current workers to avoid the problem?

Also, if you have a union, don’t forget you may have to negotiate the bonus program with its leaders. And once you have adopted the program, will it be easy to terminate it when labor availability stabilizes?

Be Sure Bonuses Aren’t ‘Nondiscretionary’

Truly discretionary bonuses aren’t “wages,” which must be counted in determining an employee’s hourly wage for the purposes of calculating overtime pay. If a bonus is considered nondiscretionary, however, you must include it in the overtime calculation.

Therefore, you should consult with counsel to be sure the manner in which the program is implemented doesn’t result in the bonus being considered nondiscretionary and part of the worker’s wages for overtime purposes.

A hiring bonus can be a useful tool in addressing the current dislocation in the labor market. Certainly, as a temporary measure, it is far superior to raising wages, which, once increased, are very difficult to reduce.

The law of unintended consequences can be a bear, however, and you should carefully analyze the potential impact of any new-hire bonuses on your operations. You should review (1) how the bonuses would affect current employees’ morale, (2) how they would affect internal equity among your job classes, and (3) whether they would have any implications for the overtime pay calculations. The key is to carefully look at all the ramifications and avoid knee-jerk reactions.

Steve Jones is an attorney with Jack Nelson Jones, PLLC, in Little Rock, Arkansas. You can reach him at sjones@jacknelsonjones.com.