Increasing diversity in organizations is extremely important for company success. Particularly when it comes to diversity, a McKinsey study says that filling these roles with women is beneficial to company success. The study found that “having gender diversity on executive teams, specifically, to be consistently positively correlated with higher profitability across geographies in our data set, underpinning the role that executive teams—where the bulk of strategic and operational decisions are made—play in the financial performance of a company.” 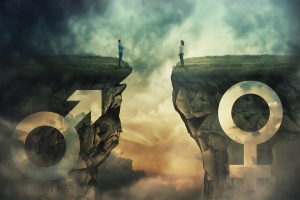 There have been waves in recent years in changing the landscape of recruiting to increase diversity, equity, and inclusion (DEI) initiatives. With artificial intelligence (AI) constantly developing, many companies are implementing it into their hiring practices to help increase diversity without the impact of human bias. According to Naomi Benjamin for Forbes, “AI-based software platforms that are both data-driven and taught to ignore traditional prejudices rely on algorithms that prevent historical patterns of underrepresentation.”

But before we can dive into how AI is helping women achieve more in the workforce, we need to understand where the problems currently lie.

Women’s Impact in the Workforce

It is no surprise the COVID-19 pandemic had a detrimental effect on employment throughout the world. When you break it down, you will notice that women were especially impacted by layoffs throughout 2020. With years of progress under our belts to disseminate bias in recruiting and close the gender gap in the workforce, it is disheartening that COVID-19 could set the progress women have made back by over half a decade.

A McKinsey study says that the pandemic has even stalled some women’s careers, resulting in one in four women considering scaling down or leaving the workforce completely. This is not unique to the United States, either. Here in Canada, women accounted for 53.7% of unemployment loss between March 2020 and February 2021.

With women already facing more challenges building a career due to systemically established biases, it goes without saying that we need to work more than ever to reestablish the progress women have made and advance it further than before in reducing gender gaps in the workforce. Considering we are all striving to be successful, the logical action would then be to promote gender diversity in the workforce. So how can we do it?

Closing the Gap from the Top Down

It does not simply come from creating gender-neutral job descriptions or investing in hiring-bias training, explained Steven Jiang for VentureBeat. Companies need to make a conscious effort to establish unbiased recruitment processes that foster DEI initiatives and eliminate barriers women may face when applying for jobs.

Many companies are investing in machine learning to help the candidate funnel in an unbiased way. With the introduction of AI into recruiting practices, companies have seen significant increases in gender and ethnic diversity using AI assessments, with over 20% more women and persons with disabilities among the candidates with the highest success rates during the recruitment process—all because of AI.

AI is centered on learning data. While we may accidentally bleed our biases into data, which we saw a few years back when Amazon’s AI recruitment tool learned to avoid female candidates, there are measures we can take in machine learning to reduce the chance of introducing our biases into models.

By teaching models using an objective annotation process rather than focusing on human interview ratings or performance metrics, companies can implement AI in a way that solely recognizes a candidate’s skill sets that are directly related to the position he or she is applying for. Of course, AI in this way would need to be paired with a skills-based assessment. However, collaborating the two can introduce a recruiting practice whereby a candidate’s race, age, gender, ethnicity, or other disseminating factors won’t matter, which would be important to increasing gender diversity in the workforce.

While we might not like to admit it, bias exists in all of us—it is a part of human nature. However, if we are truly going to take steps to reduce it, introducing mediums that allow us to eliminate bias in the recruitment process is obvious. By taking out the human factor—our inherent biases—and introducing the ever-changing world of AI, we open a window for more opportunities for candidates who might otherwise be looked over, whether it be because of their name or gender.

Simply put, reducing the gender gap in the workforce starts at hiring, and making the conscious decision to establish nonbias hiring processes is the first step toward closing the gap from the top down.

Jahanzaib Ansari is the Cofounder and CEO of Knockri. Ansari served as a key advisory member to the World Economic Forum’s Global Council on Equality & Inclusion. He contributed his expertise on ethically built AI for selection and assessment to several reports, including “Diversity, Equity and Inclusion 4.0 Toolkit” and “Global Social Mobility Index 2020: why economies benefit from fixing inequality.” Ansari’s company, Knockri, was founded because of the discrimination he faced in the hiring process. His company is an AI-powered behavioral video assessment tool that diminishes systemic bias at scale and ensures the hiring of a more diverse workforce. Knockri has partnered with large organizations such as IBM, SAP, Deloitte, Novartis, and many more. To date, Knockri has assessed over half a million candidates and increased diversity by 25% among its customers. Ansari is often invited to share his thoughts on AI, the future of work, unconscious bias, and diversity at major events internationally. He was recognized as innovator of the year by diversity group Ascend and has been named among 22 of Canada’s most promising young HR professionals by HRD magazine.