According to McKinsey & Company, women made up only 20% of the tech workforce just before the pandemic. And that number looks to be ticking downward.

A year into the pandemic, as many as 2.5 million women, versus 1.8 million men, were lost from the U.S. workforce. This turn of events could potentially set back years of progress made by working women in technology unless we make conscious decisions to curb the impact.

I am not eager to turn back the clock. 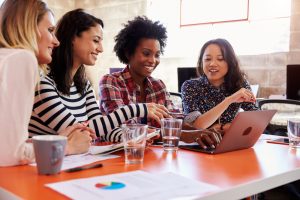 Years ago when I was pregnant with twins and about to take maternity leave, an executive I worked with said he would miss me going forward. His sentiment was genuine, but he had a false assumption that I would naturally stop pursuing a career and become a stay-at-home mom. I soon discovered that my boss also assumed the same and was making backup plans for when I would officially resign while on leave.

Upon hearing about my desire to return to work, he proposed shrinking my role to help me as a busy professional and mom. The intent was genuine and from a place of care, but I suspect those types of assumptions were not made about most of my male colleagues when they had kids. I was loving the anticipation of becoming a mom, and I also knew that I loved having a career, and I needed the two to meld together.

Rather than allowing my role to shrink, I lobbied hard to maintain my role and continued to push for stretch opportunities to enhance my career and development. Had I not done this, I don’t know where my career would be today.

Fast-forward years later, and I had a chance to look out for other women when another female colleague and I pushed hard to hire a highly qualified woman who was in her third trimester despite the reluctance of others. This hire ended up having a tremendous impact on the business, and she is now an HR executive at a notable start-up.

I recently had the privilege to talk with a panel of female executives in tech who shared their own experiences and insights. Here are five key takeaways to inspire other women, whether they be seasoned professionals or just starting out their careers, in a high-tech industry traditionally dominated by men.

Diana Parker, WWPS Strategy and Operations Leader (Interim) at Microsoft, says if there is a list of 10 qualifications needed for a particular job, a man will have just 2 of them and think he’s perfect for the role. However, a woman might have 8 qualifications and hold back from applying because she doesn’t possess all 10.

“We grow most through embracing new challenges,” she says. “Remember that just because someone is jumping up and down saying they have a particular skillset, the reality is that it’s often the person next to them that really has that skillset. That’s very important to think about as we move forward.”

2. Imposter syndrome is common, but don’t believe it.

Imposter syndrome is a pervasive feeling of self-doubt that erodes confidence and ultimately prevents some women from advancing in their tech careers. And while the fear is real, the best antidote is to simply own your seat at the table and not get swept away by the negative thoughts in your head.

Stacey Hunter, Vice President of Technical Product Management at Ruffalo Noel Levitz, concedes that one of the things she has always struggled with is the “what if” abyss—those negative conversations with yourself that say you can’t do this or you’re not qualified to do that. Her advice: Just don’t listen.

“Stop yourself,” she says. “Recognize it and implant: ‘I’m strong. I’m brilliant. I deserve this. I belong.’ Those are key things that I’ve had to learn. Through self-reflection, we get rid of the negative voice.”

Priyanka Chatterjee, Director of Technology Innovation and Development at McDonald’s, says she, too, has struggled with imposter syndrome and feeling that she wasn’t delivering enough value in her job. She remembers telling a mentor about those insecurities. The advice she got back was to give herself more credit for the work she did. “Now, I would tell my younger self to value everything that you do,” she says. “I remember there was a phase in my life where I would self-deprecate or just make fun of the things I did. But I think words have worth and we need to change that language.”

Tina Eskridge, Marketing Excellence Lead at Microsoft Advertising, admits to being a borderline introvert. As a result, networking doesn’t come naturally to her. But she adapted by teaching herself how to network and maintain relationships in a way that best works for her.

“The biggest point about networking is that it has to be organic and authentic,” she says. “My network is like my own personal board of directors. It’s a tight-knit group of people I rely on for career advice, or for dialog around the decisions I’m making. When you find people who engage with you and really understand how you think, that can lead to new career opportunities.”

Yasmin Karimli, Senior Director of Device Technology and Operations at T-Mobile USA, agrees that the relationships you establish can help increase your influence and provide critical support when you need it most. “Building that network is hugely important,” she says. “Just be

genuinely interested in those people and talk to them in terms of what their interests are and make them feel important because then they will reciprocate.”

Chitra Herle, Divisional CIO at Silicon Valley Bank, believes women have an obligation to pay it forward to help other women stay in technology. “Make mentoring part of the job,” she says. “Identify women who need support and provide mentorship or whatever resources they need to be successful. This is something we all can consciously do every single day as part of our jobs.”

5. Slow down, and enjoy the process.

Eskridge adds that it’s vital to remember your career is a marathon, not a sprint. “When you’re coming out of college you have this checklist of things that you want to accomplish and I was that person that was very driven because I was one of the first in my family to graduate from college,” she says. “I thought I had to do everything in short order. I realized none of this is linear. Your career progression is around and about, and your experiences won’t always come in the way you thought they would.”

Personally, I’m grateful for the chance to have candid conversations with these women. Each, in her own way, is making a contribution toward changing the paradigm and encouraging more women to stay the course and lead despite the trade winds and challenges we might face. The fact is that having more women in tech and in leadership roles is good for society and good for business, innovation, collaboration, and effectiveness. Diversity is not a nice-to-have; it’s a must-have.