I recently read an interesting article by Kelly Anderson exploring the surge in salary increases for entry-level professionals as top companies try to retain their young talent. Elite law firms and Wall Street companies are paying entry-level associates premium salaries and raises as they attempt to keep people in the fold. 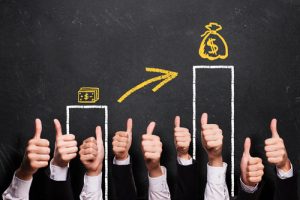 At the same time, employees in some of the industries have become vocal about problems with the work culture. The author cites a group of junior analysts at a New York City investment bank who complained about 100-hour workweeks and the breakdown of their physical and mental health.

But what really got my attention was the “strategy” of two well-known, massive banks that boosted junior bankers’ salaries by $10,000 to $20,000 in an effort to improve the work culture for young employees! If you are an HR professional reading this, you’re probably as aghast as I was.

Throwing money at dissatisfied employees isn’t necessarily new, especially among white-collar industries. In the above story, the raises doled out by the two banks created salaries of around $130,000 for first-year associates, i.e., kids just out of college.

So, is $130K enough for young adults to hand over their lives for the sake of company profits? John D. Rockefeller was once asked, “How much money is enough?” His response was, “Just a little bit more.” This from a man who at one point had a net worth roughly equivalent to one percent of the entire U.S. economy.

How much is enough? The question sounds like a deep existential conundrum that should have an equally complicated philosophical response. But more than one scientific study has proven there really might be a “correct” answer to the question.

In 2010, Daniel Kahneman and Angus Deaton with the Center for Health and Wellbeing at Princeton University published results of their study about whether money buys happiness. One finding was that emotional well-being rises with income, but there’s no further progress beyond an annual salary of about $75,000.

The findings were confirmed in a January 2018 study by a group of researchers who looked at happiness and income satiation and found the “feeling of fullness” for emotional well-being occurs around $60,000-$75,000. In fact, their research suggests too much money can negatively affect happiness at certain “turning points.”

How likely is an organization’s culture going to improve simply by increasing salaries for well-paid employees who already feel abused, unappreciated, and maybe even dehumanized? For some cash-rich companies, paying more may seem like the perfect panacea; it’s not. Money doesn’t buy or create culture.

For many organizations, culture is a vague concept and often goes undefined. But every workplace has its own culture, specifically defined or otherwise. Leadership habits and communication styles are examples of ways a company’s culture is demonstrated and reflect senior leadership’s values. Staff can usually articulate the culture, as they see it, and their description is often different from what you might hear from senior leaders.

Organizational leadership has to make defining culture a priority, which doesn’t mean just accepting whatever culture evolves around their own good or bad behaviors. Begin by defining the organization’s commonly shared values. Then leadership must be intentional about establishing and maintaining the desired culture, which will provide a foundation for employee-related decision making, including compensation matters.

Most organizations worry about keeping their salaries competitive with the relevant market. Then there are those that don’t think about a salary strategy and pay at the top end of the market or even above-market. So, what’s wrong with paying above-market if the company has the funds to do so?

Several unintended consequences can result. For one, overpaid employees get comfortable, even complacent. A client I worked with several years ago was proud of the company’s virtually nonexistent turnover, a result of overpaying. Maintaining a stable but unmotivated workforce doesn’t facilitate organizational success.

Overpaying employees during a period of financial prosperity is easy. But what happens when things change? When certain employees’ salary expenses are disproportionate to the entire salary budget, the company may not be able to compensate other workers appropriately, which leads to pay inequities resulting in poor morale.

Employees who are regularly overpaid have an unrealistic view of where their skills and experience fall in the competitive market. Many will find out the hard way, perhaps when their company is purchased or has layoffs, that they can’t replace their current income.

Going back to the employees who already feel unappreciated and disengaged as a result of a toxic culture, you may discover they are insulted when management’s solution is to increase pay. In those situations, simply tossing more money at them communicates management’s disregard for their work-life balance.

When employees’ well-being is suffering or the work culture has become toxic, money will not “fix” either one. It’s important for leaders to know when they have a pay problem versus a culture problem.

While it’s tempting to try to buy your way out of a culture crisis, remember your company’s culture didn’t evolve overnight, and it can’t be improved with one quick intervention. Leadership must be committed to making the organizational improvements that will foster a healthy culture and employee well-being, which in turn will have a positive impact on worker retention.

Jennifer Blake is a senior HR consultant at PerformancePoint LLC in Memphis, Tennessee. You can reach her at jblake@performancepointllc.com.