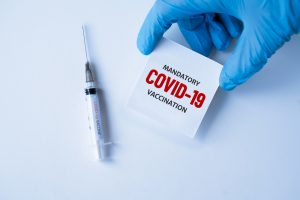 This case is moving at a breakneck pace by legal standards, and it remains quite possible the Supreme Court will issue a ruling before the state’s vaccination deadline date of October 29, 2021. While this is fascinating stuff for lawyers, where does it leave affected healthcare providers and their employees?

Right now, Maine’s healthcare provider vaccine mandate remains in effect, and the only available exemption under the state statute and implementing rule is medical. No religious exemption is available under the terms of the rule, and to date the federal courts have upheld this position.

For employers that are concerned about liability to terminated employees who claim they were denied a religious accommodation under Title VII of the Civil Rights Act of 1964, the best defense seems to be twofold: (1) The healthcare provider is following a state mandate that has been upheld in the federal courts and (2) granting a religious exemption may create an undue hardship. This is tricky stuff, so conferring with counsel is recommended.

For those of you not subject to the rule but who have implemented or are considering vaccine mandates, the case is supportive of a vaccine mandate and identifies a compelling government interest in mandatory vaccines.

Peter D. Lowe is an attorney with Brann & Isaacson in Lewiston, Maine. You can reach him at plowe@brannlaw.com.