In an effort to provide our subscribers with access to sites in the states in which they operate that can provide state-specific assistance, resources, and information for businesses and employers, we have created the below list of the most valuable, relevant sites we could identify based on our research.

There was nationwide outrage in April of this year when two black men were arrested in a Starbucks in Pennsylvania. A Starbucks employee had called the police, claiming that the two men were loitering without paying for anything, and the two men stated that they were waiting for someone else to arrive.

A disability plan participant’s state-law privacy lawsuit against the plan’s claims administrator was dismissed by a federal district court, which found it was preempted by the Employee Retirement Income Security Act (ERISA).

Employers cannot count compensation paid during meal breaks toward overtime pay due to employees, a federal appeals court has ruled. 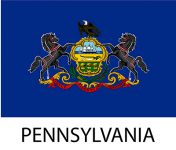 By Gregory J. Wartman, Saul Ewing LLP A Pennsylvania federal court recently ruled in favor of an employee who was terminated after taking leave to care for her sick parents. The court ruled that an employee does not have to use magic language in requesting Family and Medical Leave Act (FMLA) leave and rejected the […]

by Gregory J. Wartman In November, we reported that Pittsburgh had enacted a paid sick time ordinance for employees working in the city that was scheduled to take effect January 11, 2016 (see “Pittsburgh passes ordinance requiring paid sick time”). On December 21, 2015, a Pennsylvania judge struck down the ordinance, ruling that it is […]

Employees go on vacation, but business doesn’t stop. So sometimes workers are asked to put in time when they’re expecting to be kicking back at the beach. Working from home is a popular arrangement, but what are the workers’ compensation implications when an employee is injured in a home office? Lay-off meetings are never easy, […]

The Constitution mandates that the United State’s residents be counted every 10 years to determine the number of seats each state receives in the U.S. House of Representatives. The U.S. Census Bureau has begin releasing the results from the 2010 Census, and here are the first strokes in the “new portrait of America” it paints: […]

by Robert C. Nagle Employers can expect increased enforcement efforts from federal and state labor and tax authorities over what’s believed to be a rising tide of misclassification of employees as “independent contractors.” There can be significant payroll savings associated with classifying workers as contractors. For example, employers typically aren’t required to withhold or pay […]

by Lorraine Yeomans The 2010 state legislative sessions have kicked off across the nation, and one of the first pieces of legislation to be signed into law this year was a bill legalizing the use of medical marijuana. On January 18, as one of his last acts before leaving office, New Jersey Governor Jon Corzine […]