Recruiting is changing at a rapid pace. Some organizations are abandoning traditional methods for social media; some think software can do a better job than people. 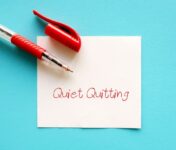 The phrase ‘quiet quitting’ became popular after a TikTok video describing it went viral. However, workforce studies on the changing world of work support the rise of quiet quitting and suggest it’s more than a social media hashtag. Quiet Quitting Is An Intentional State of Mind The term implies a norm where people feel they […]

Although the media is abuzz with news of layoffs and debates about whether we are in a recession, one thing is certain: There is a talent shortage, and it will likely persist as long as the job market remains tight. For the fourth consecutive year, employers surveyed for iHire’s annual “State of Online Recruiting” report […]

We’ve written extensively on the challenges employers are facing in filling open positions. Whether one attributes those challenges to the Great Resignation, COVID stimulus money, or a skills gap, the fact is that many companies are struggling to find workers they feel can perform the essential functions of their open positions. They just can’t seem […]

With the lingering effects of the pandemic exposing organizations to an urgency to upskill and reskill employees, the big questions HR leaders and executives are facing are what the future of work looks like and how to retain productive employees. The fact is, more than half of the workers who left their job in 2021 […]

In times of urgent hiring need, companies turn to outside recruiters who can find employees to fill necessary roles. Traditionally, recruiters can quickly find a good candidate for the position, but this sometimes comes at the expense of finding a candidate who is actually a better overall fit for the company. However, recruiting firms need […]

On July 14, 2022, the Wisconsin Court of Appeals ruled in favor of a former employee in a dispute over whether two uniquely worded restrictive covenants against him violated Wisconsin law. The case presents new considerations regarding what employers can and cannot include in noncompete clauses with severed employees.

Companies around the globe are struggling to fill their ranks with workers. As workers, sensing their newfound bargaining power, leave lower-paying jobs to find more lucrative positions, it’s often retailers that feel the pinch of the labor shortage most acutely. Tight Labor Market Leads to New Approaches Some retail employers have seen the writing on […]

It’s the year 3022, and you’ve just applied for a new job as an engineer on a starship traveling to Mars. You submit your resume, and an algorithm selects you for an interview. You record video answers to the employer’s interview questions and upload them for a robot to review. Using software to review applicant […]

For well over a year now, the big story in the labor market has been the Great Resignation and the tremendous difficulty so many employers have been having finding qualified and engaged workers. Restaurants have had to cut back on hours and days of operation, airlines have had to cancel routes, and job openings in […]