This week, Elliot Page shared on social media that he is transgender and identifies as nonbinary. Elliot, who was formerly known publicly as Ellen Page, is known for such popular films as Juno (for which he received an Oscar nomination) and Inception and can currently be seen in Netflix’s Umbrella Academy. Elliot’s announcement further shed […]

Employers can look forward to learning whether sexual orientation and gender identity are covered under federal antidiscrimination law, now that the U.S. Supreme Court has decided to take up three cases that will provide clarity on the issue. 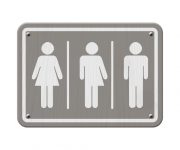 Although he’s been out of high school for more than a year, Gavin Grimm continues to pursue his case against the Gloucester County School Board for refusing to allow him to use the high school restroom of the gender with which he identifies. A recently granted appeal on a novel question of law at the […]

On October 4, 2017, U.S. Attorney General Jeff Sessions issued a memorandum announcing the U.S. Justice Department’s (DOJ) new stance that transgender employees aren’t protected from discrimination under federal law. The announcement reflects a reversal from the Obama administration’s interpretation of the law and runs counter to federal court decisions and other federal agencies’ […]

The U.S. Supreme Court’s announcement that it has decided not to hear arguments in a case regarding restroom access for transgender students doesn’t directly affect employment, but it puts employers on notice to keep up with developments that could affect the workplace. On March 6, the Court announced that it is sending back to a […]

by Michelle Lee Flores and Brett Nicole Taylor California employers need to be in compliance with the state’s new “all-gender” requirements for single-use restrooms by March 1. Assembly Bill 1732 requires all single-user toilet facilities in any business establishment, place of public accommodation, or local government agency in California to be identified as an all-gender […]

by Stefanie M. Renaud Massachusetts law has prohibited discrimination against transgender people in employment and housing since 2011, but a new law taking effect on October 1 will expand transgender protections to places of public accommodation. On July 8, Governor Charles Baker signed into law a bill that prohibits discrimination against persons because of their […]

by Richard L. Rainey On Wednesday night, the North Carolina General Assembly passed House Bill (HB) 2, which was then signed by Governor Pat McCrory. While HB 2 was prompted by the desire to overturn Charlotte’s recently enacted ordinance that banned discrimination against LGBT people in the provision of public accommodations and allowed transgender individuals […]