Zero-tolerance policies are a good thing, right? Because of the many workplace misconduct scandals that have become public in recent months, employers are taking harder looks at how they handle harassment allegations, from addressing complaints to carrying out discipline for offenders. At first glance, zero tolerance might seem to be the easiest and most efficient way of dealing with such a problem. And while it may be the right way to go for your company, it’s worth looking deeper before you decide. 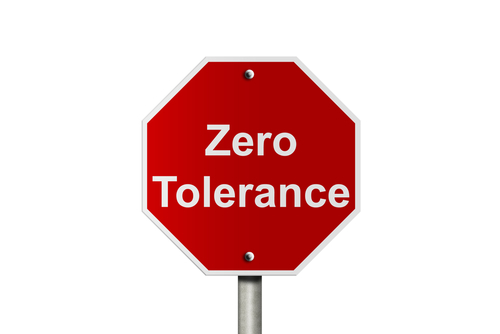 The first thing you should do is determine exactly what “zero tolerance” means in your company. Will it truly be the one-size-fits-all method it sounds like? Will telling an off-color joke in the break room result in the same immediate termination that sexual assault would? Your policy needs to clearly state what conduct will not be tolerated.

Without that clear definition of what the company has zero tolerance for, employees will live in fear that they will be fired on the spot for any minor slip-up or comment that is misinterpreted by a coworker. Having employees who won’t communicate with one another isn’t an atmosphere that promotes productivity or longevity. It will encourage some employees not to report behavior that should be reported. They may be experiencing or witnessing behavior that should be stopped but will allow it to continue because they don’t believe it to be severe enough to cost someone their job. Or they may not want to be known by coworkers as the one who ruined their friend’s career. There’s always the off chance that an employee will have such an intense personal dislike for another employee that he will embellish (or lie about) that person’s conduct for the purpose of getting her fired.

The Equal Employment Opportunity Commission’s (EEOC) antiharassment task force offered some guidance in 2016 regarding zero-tolerance policies. It cautioned that the term “zero tolerance” could be misleading and counterproductive unless it is properly defined. It encouraged employers to have no tolerance for abusive or harassing behavior by holding employees accountable and ensuring that their responses are prompt and “proportionate to the offensiveness of the conduct.” And, as always, the policies must be enforced consistently.

Zero-tolerance policies can, and should, recognize that not all offenses are equal—the circumstances of the alleged violation, the seriousness of the allegations, and the histories of the individuals involved should all be considered. As with all reports of harassment, investigators need to explore the severity and pervasiveness of the conduct. Even if it doesn’t rise to the level of unlawful harassment, inappropriate conduct has negative effects on the workforce. And if it isn’t stopped, it can escalate to unlawful harassment.

It’s important to make sure that zero-tolerance policies apply to everyone at every level of the company. Managers and supervisors need to understand that they are in positions of trust and leadership and will be held accountable for their actions. When employees see their leaders acting unprofessional or ignoring company policies, the message they receive is that such behavior is acceptable—or encouraged—by their employer.

JW Furman is an EEO consultant investigator, mediator, and arbitrator at Lehr Middlebrooks Vreeland & Thompson, P.C. Before working with the firm, Furman was a mediator and investigator for 17 years with the Birmingham District Office of the EEOC. She has also served as an arbitrator and hearing officer in labor and employment matters. She also contributes to the Alabama Employment Law Letter, and may be contacted at jfurman@lehrmiddlebrooks.com.