What can NBC’s Good Girls teach us about retaliation claims at work? Let’s find out. 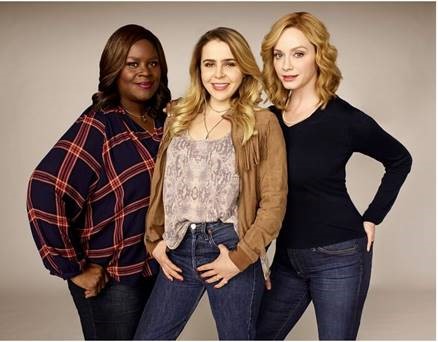 It’s so hard to say goodbye. (Cue Boys II Men, and pass the tissues.) After four seasons, NBC has forced fans of the dramedy Good Girls to do just that. Good Girls tells the tale of the wild adventures and mishaps of sisters Beth (Christina Henricks) and Annie (Mae Whitman) and their best friend, Ruby (Retta). Beth is the doting, perfect wife and soccer mom married to Dean (Matthew Lillard), a cheating used car salesman whose poor decisions drive their family into financial ruin.

Ruby is happily married to Stan (Reno Wilson), a mall cop turned policeman, but reaches her breaking point when their daughter is diagnosed with a severe medical issue and they cannot afford the treatment. Annie is the cool, irresponsible, single mom in the middle of a brutal custody battle with her ex and is also in dire need of money. The trio come up with a foolproof scheme, in their eyes, to solve their various financial woes, robbing the local grocery store where Annie works as a cashier. What could possibly go wrong? If you guessed “everything,” you would be correct.

In the pilot episode, the women manage to successfully steal $500,000 from the store—far more than the $30,000 they were expecting. However, their joy at the unexpected payday is short lived. Naturally, the grocery store was serving as a front for a local gang, and the women inadvertently stole the gang’s money. The gang leader Rio (Manny Montana) pays Beth a visit to inform her that the women need to repay his money with interest ASAP. Rio explains that if the women work for him, he will clear their debt.

The rest of the series follows the trio’s spiral deeper and deeper into a life of crime, including money laundering and counterfeiting. The women quickly become surprisingly good criminals, notwithstanding a few hilarious rookie mistakes and missteps along the way. Each time the women try to escape, they are drawn back in to working for Rio. As time goes on, the trio’s activities trigger the suspicions of the feds. The women try various desperate and ineffective methods of escaping the clutches of their boss. After one of the women’s family members is arrested for the trio’s crimes, they decide to cooperate with the Secret Service to take Rio down once and for all.

Rio, however, is a lifetime member of the “snitches get stitches” club and does not take the women’s cooperation with law enforcement lightly. In response to the women’s disloyalty, he engages in a series of retaliatory actions, including theft, kidnapping, assorted threats, assault with a deadly weapon, and setting them up for his crimes.

Clearly, Rio is not the model of upper management behavior in the face of employee complaints on whistleblowing activity. If Rio were a legitimate business owner, his actions would have left him vulnerable to the obvious jail time, as well as the less obvious administrative complaints and lawsuits. So, what can legitimate businesses possibly learn from a criminal gang leader?

Just Say No to Retaliation

Workplace retaliation claims are a serious issue, and such claims are on the rise. Various state and federal laws prohibit employers from retaliating against employees (i.e., taking adverse actions) for engaging in protected activity.

What can employers do to not be like Rio (apart from not operating a criminal enterprise and demanding forced labor) and protect the company from retaliation claims?

Second, employers can assure employees who report unlawful activity that they will not be punished for taking actions that are protected by law.

Third, employers can investigate complaints promptly and document the investigation, including all efforts to prevent retaliation.

Fourth, employers can limit who is told about employee complaints to those on a “need to know” basis.

Finally, employers can evaluate the risk of potential retaliation claims before taking adverse action against employees who have filed complaints, especially if the complaints were filed close in time to the potential adverse action. Employers may also consider having a management-level employee who is unaware of the employees’ protected activity review personnel decisions related to those employees for several months after the employees’ protected activity.