Children and teens across the country continue to struggle with mental illness. Experts agree that we are in the midst of a youth mental health crisis. In many ways, the COVID-19 pandemic had a severe impact on kids’ and teens’ mental health, and they are reaching a breaking point. Being stuck at home during lockdowns, […]

The global economy is incredibly dynamic, meaning that technologies, strategies, and mindsets that are successful today may be less successful or even counterproductive in the near future. Today’s economy is also highly driven by human talent as one of the most important assets any organization possesses. Combined, these two features of the modern economy mean […]

During the COVID-19 pandemic, desk-bound workers switched to remote work, continuing their work lives despite the global crisis unfolding around them. Whether or not they were happy, how long they could work from home and when they would have to go back to the office became topics of general interest to the public and conversation […]

The “Great Resignation” is far from over. In fact, it appears to be heating up. According to the Bureau of Labor Statistics, the percentage of unemployed Americans who voluntarily left their jobs and immediately began looking for new ones increased to 15.9% last month. This is the highest share of “job leavers” in more than […]

Burnout, anxiety, unexpected retirement, quit quitting—how often do we hear these words? Is something wrong with our workplace today? Or maybe it’s that people are giving up on achieving big things. How do we prevent these from happening? A McKinsey report says that 40% of workers globally say they may leave their jobs in the […] 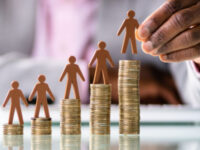 On January 1, 2022, Arizona’s minimum wage increased to $12.80 per hour, making it the sixth highest among the 50 states (according to the minimum wages posted on laborlawcenter.com). While we continue to see an increase in state and local minimum wage statutes, according to minimum-wage.org, 21 states either had no minimum wage laws or had adopted […]

We often note the circuitous and fortuitous paths that lead many of the subjects in our series on diversity leaders to their careers. So many start out far from any kind of diversity, equity, and inclusion (DEI) work and find their DEI calling after years spent in marketing, sales, or some other corporate function. LaTanya Flix, […]

Some organizations believe there are at least two possible approaches to ensuring staff have the right skills: A company can either hire people with the skills the organization needs or train current employees on those skills. Many companies, buying into the idea of these two options, believe it’s less hassle to simply rely on recruitment. […]

In this digital age, more people are seeing the advantages of conducting business online. With this mass entry into the digital space, there come a number of risks. This is why it is crucial to consider cybersecurity training in every workplace and ensure that it is done right. The following are some of the important roles […]

It’s too convenient, in these tumultuous times, to chalk up almost any shift in the way we live and work to the aftereffects of COVID-19. While it’s clear that this historic pandemic prompted many changes, a number of trends were already in motion, especially in the employment world. 2023 will see many of these trends […]