National Labor Relations Board (NLRB) General Counsel (GC) Jennifer Abruzzo recently issued a memorandum (GC 21-08) declaring certain college athletes will be classified as employees, giving them the right to unionize and engage in other protected, concerted activity. Read on to learn how things might play out in the real world. 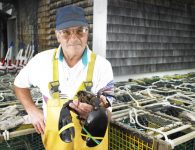 by Connor Beatty Maine lobstermen, paralegals, and college football players may not initially strike you as the type of workers who would join a union. Yet, in the past year, each group has taken steps toward unionizing, highlighting the trend of the modern union with organized labor branching out into previously unimagined industries. Why would […]

Last week, we brought you an article about the UAW losing a recent election at VW and how it may be a sign of the end for the union. As unions struggle in some traditional areas, they are reaching out into previously uncharted territory, making headlines this week with the story of college football players […]