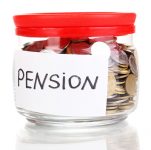 The Pension Benefit Guaranty Corporation (PBGC) recently released its annual report for fiscal year (FY) 2015. The report shows the agency paid $5.7 billion to more than 800,000 people in failed pension plans, which is comparable to the payments PBGC made in FY 2014.

The projected insolvency date for the insurance program for multiemployer pension plans, which cover more than 10 million Americans, has been delayed by 3 years, according to the FY 2014 Projections Report recently released by the Pension Benefit Guaranty Corporation (PBGC).

Pension plan sponsors that offer to “cash out or annuitize benefits” for former employees would have to report this to the U.S. Pension Benefit Guaranty Corp., the agency has proposed. In a routine information-collection change request to the Office of Management and Budget posted Sept. 23 (79 Fed. Reg. 56831), PBGC said it intends to […]

The Pension Benefit Guaranty Corp., in a policy reversal, has agreed to exempt most companies and their pension plans from sweeping “reportable events” requirements first proposed in 2009. This news should be a relief for the many small or financially sound companies with defined benefit plans that had expressed concern about reporting relatively minor business […]

The U.S. Department of Labor’s (DOL) fiscal year 2013 budget request continues many priorities emphasized in the previous year’s budget, such as the effort to combat worker misclassification, while ending or consolidating some programs aimed at helping women and veterans find jobs. The DOL’s 2013 budget request comes in at $12 billion. The 2012 request […]

It’s no secret that the private pension system in the United States is in crisis. Last week, the Pension Benefit Guaranty Corporation (PBGC), which insures pensions for about 44 million Americans, announced that it has a startling deficit of $23 billion, fueled largely by having to take over pension plan liabilities of bankrupt airlines. But […]