Olympic runner Caster Semenya, a woman by her own identification, was born with a unique body. While outwardly female, her body produces an excess of testosterone compared with other women. Olympic authorities have at times attempted to regulate the amount of testosterone in people like Semenya, and the entire situation has raised real questions about the role of gender and biology in competitive sports, as well as in the workplace. 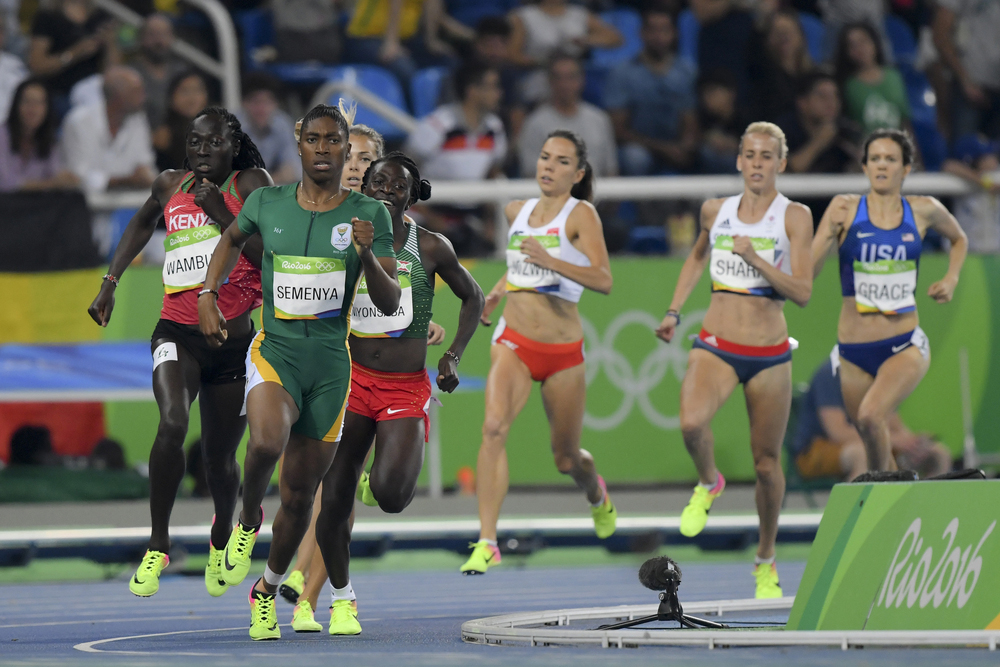 In track and field, the 800 meters is a fascinating race. At 2 laps around a standard 400-meter track, the 800 meters is the shortest of the middle-distance events (which generally range from 800 meters to the mile). The race requires a unique combination of speed and endurance and has a reputation for being particularly brutal.

The Unique Case of Caster Semenya

For the past several years, South African Semenya has dominated the women’s 800 meters by winning gold medals in the Olympic Games in 2012 and 2016, as well as in the International Association of Athletics Federations (IAAF) World Championships in 2009, 2011, and 2017. Semenya has won the 800 meters in 30 consecutive events. Her ascent, however, has not been without controversy.

Semenya lives her life as a woman and has always done so. However, she has been described as “intersex,” meaning that her sex characteristics do not fit “typical binary notions of male or female bodies.” In track and field, where athletes are grouped together for competition based on whether they are male or female, an argument emerged early in Semenya’s career that her intersex status provided her with an unfair competitive advantage.

In 2009, the IAAF—track and field’s international governing body—requested that Semenya take a gender verification test to confirm that she is a woman. For privacy reasons, Semenya’s test results were never officially released, and the IAAF allowed her to continue to compete (though her results were apparently leaked to the media at the time). In the past decade, however, the IAAF has implemented (or attempted to implement) a series of rules regulating the natural testosterone levels of athletes such as Semenya.

Currently, Semenya’s appeal of a decision by the Court of Arbitration for Sport upholding the IAAF’s current testosterone suppression guidelines is pending before the Swiss Supreme Court.  While some have cited the need for a “level playing field” as a justification for rules aimed at Semenya, others believe that the IAAF’s approach unfairly punishes individuals who simply have a competitive genetic advantage (akin to height or body type) through no fault of their own.  Some have cited racism and gender stereotypes as motivating factors in the IAAF’s decision-making with respect to Semenya.

Mirroring circumstances on the track, issues of gender identity have also become more visible in society at large, including within the employment law realm. Earlier this year, the U.S. Supreme Court agreed to hear a case addressing the issue of whether Title VII of the Civil Rights Act of 1964 bars discrimination based on gender identity by explicitly barring discrimination based on “sex.” SCOTUSblog summarizes that case, R.G. & G.R. Harris Funeral Homes Inc. v. Equal Employment Opportunity Commission, as follows:

The petition for review was filed by a small funeral home in Michigan, owned by Thomas Rost, who describes himself as a devout Christian. In 2007, the funeral home hired Aimee Stephens, whose employment records identified Stephens as a man. Six years later, Stephens told Rost that Stephens identified as a woman and wanted to wear women’s clothing to work. Rost fired Stephens, because Rost believed both that allowing Stephens to wear women’s clothes would violate the funeral home’s dress code and that he would be “violating God’s commands” by allowing Stephens to dress in women’s clothing.

Some states have also modified existing civil rights laws to bolster protections for employees based on sex, gender identity, and/or sexual orientation. California’s Fair Employment and Housing Act (FEHA), for example, prohibits discrimination based on “sex,” “gender,” “gender identity,” “gender expression,” and “sexual orientation.” FEHA regulations specifically define “gender identity” as entailing “each person’s internal understanding of their gender, or the perception of a persons’ gender identity, which may include male, female, a combination of male and female, neither male nor female, a gender different from the person’s sex assigned at birth, or transgender.”

Gender identity in the workplace remains a complex issue, and the legal landscape remains somewhat uncertain in some regards. Nevertheless, by treating employees fairly and not acting arbitrarily, employers can limit potential discrimination liability while fostering positive employee morale.