“How do I consider age when reviewing someone for an executive role?” Age discrimination—being considered too old or too young—can be a factor in executive hiring at the most senior levels. Executive hiring is complex, however, and depends on a variety of issues, including personal attributes, industry, and function. 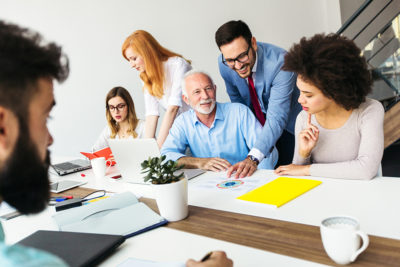 Age is a bigger factor for some C-suite jobs than for others. A 2017 Korn Ferry report presents the average ages of C-suite executives from oldest to youngest in the following order: CEO, CFO, CHRO, CMO, and CIO. Hiring managers often look at age differently for C-level roles than for other leadership positions based on these roles’ core needs.

Normally, CEO, CFO, and CHRO roles tend to be more about experience and judgment, whereas CMO and CIO roles tend to be more about creativity and innovation. This is where a hiring manager usually makes the distinction between what a young professional can offer the role and what an older professional can provide—whether or not he or she is consciously aware of any age bias.

How Can HR Help Ensure the Right Hire for an Executive Position Without Discriminating Based on Age?

It helps to use a framework such as the one discussed by Arthur C. Brooks in his article in The Atlantic, which is provocatively entitled “Your Professional Decline Is Coming (Much) Sooner Than You Think.” Brooks distinguishes between two kinds of intelligences that present differently as we age. Pulling from the work of 1940s psychologist Raymond Cattell, Brooks highlights the distinction between “fluid intelligence” vs. “crystallized intelligence.” The former refers to the “intellectual horsepower,” largely for creating and innovating; the second refers to accumulated knowledge, or “wisdom,” which increases with age. Brooks posits that fluid intelligence declines with age, while crystalized intelligence increases.

Forty years and older is usually near the start of C-level careers, not the end. HR managers understand that senior leaders operate within a complex interplay of other executives, professionals, and staff. Because success is influenced by others around them, as well as a myriad of variables, including market factors, it’s far more difficult to identify quality of output, or the lack thereof, as tied to one specific factor like age. What if a CEO who has tremendous success as a 50-year-old is then said to have “failed” within the same or a different company at 60? Can we say the CEO failed because of declining intellectual capabilities, or might there be other factors at work?

Ultimately, this is the problem with Human Resources professionals’ taking too dichotomous of a view of “fluid” vs. “crystallized” intelligence as they pertain to executives. The lines between intellectual horsepower and creative intelligence blur when it comes to most senior roles. HR may focus on the wisdom rather than the innovative prowess of a CEO relative to a CMO, but both kinds of intelligence are required in both positions. Whereas the pure “creative geniuses” may be able to get away with a lack of good judgment, most senior executives cannot, at least not for long.

Gray hair is symbolic not only of experience but also of the wisdom that emanates from it. All C-level roles necessitate some level of both intellectual horsepower and creativity. No one goes out to hire a wise but creatively bereft CEO. And no one intentionally hires a brilliantly cutting-edge CIO who has poor judgment. Balance is required, and where that balance falls on a continuum depends on what the organization needs in that role at that time.

What Guidance Can HR Offer to Maximize Success in Matching Candidates for C-Suite Positions?

First, we need to acknowledge that age bias exists in the workplace. Some of that bias may be the result of misplaced assumptions about intellectual or creative decline; likewise, some of that bias may result from a host of other assumptions that factor into the hiring process. Specifics matter in hiring decisions: the executive’s skills, background, interpersonal qualities, and accomplishments against the backdrop of what an organization needs at that time.

The Age Issue in Senior-Level Hiring Is Real and Complex

Bias exists, but how that bias manifests is different depending on the specifics of the organization, people, and circumstances. HR and hiring managers need to be aware of unconscious biases and address potential “red flags” at the start of the recruiting process. HR can lead the way by developing clearly defined job responsibilities and requirements, aligning those with a well-articulated organizational mission statement and core values, and identifying agreed-upon success metrics for each new hire.

Howard Seidel co-leads the Essex Partners practice and works with executive clients across a wide range of industries. With over 25 years’ experience, Seidel has guided hundreds of executives with his in-depth knowledge of the strategic and tactical elements of career coaching, career transition, and career change. Before moving to Essex Partners, he was a VP at Keystone Associates.