Just as employers were taking a look at a bill in Congress aimed at providing paid leave for employees affected by the coronavirus/COVID-19 pandemic, the House-passed legislation took on changes in the Senate. As of early March 17, no Senate vote had been scheduled. 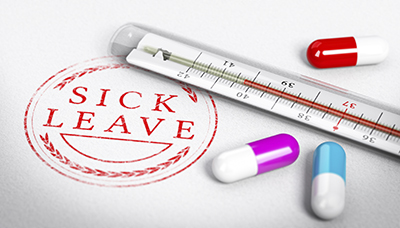 Worries from business interests have resulted in a scaling back of the original paid leave provisions in the bill, according to a report in The Wall Street Journal. The new version of the bill still provides 2 weeks of paid leave for sick workers, those who are quarantined or caring for family members with COVID-19, and those who have children in schools or daycares that have closed.

The new bill also still provides 10 more weeks of reduced-pay leave but only to workers caring for a child whose school or daycare has closed, according to the report. Healthcare providers and emergency responders, as well as quarantined workers and those caring for a family member affected by the virus, would not be eligible for those 10 more weeks of leave.

That differs from the first version of the bill, which provided that all the workers who received the 2 weeks of paid sick time would be eligible for the other 10 weeks of paid time at two-thirds their regular pay.

The bill covers a lot of ground and may undergo more change, but attorneys who advise employers on legal matters urge calm.

“I feel like mostly I am just telling everyone, take a deep breath—one step at a time,” Jo Ellen Whitney, an attorney with the Davis Brown Law Firm in Des Moines, Iowa, says. Even if details change, she says employers should be able to have time to figure things out. “One thing 30 years of practicing employment law will teach you is that panic never helps.”

Here’s a look at some of the major points of the bill that show the general direction lawmakers are going even as more changes are being made.

The House-passed bill would apply to all public employers regardless of size and to private employers with fewer than 500 employees. Why are large employers exempt? Such employers are more likely to already offer sick pay or other paid time off, but that may not be the only explanation.

“The reason this applies only to employers who employ fewer than 500 employees may be because the government is largely picking up the tab via tax credits, which they want to provide only to small/medium companies,” Ryan J. Funk, an attorney with Faegre Drinker in Indianapolis, Indiana, says.

The bill would apply to both full- and part-time workers, and it would even provide help for certain gig workers in the form of a tax credit.

The bill would require that covered employers must provide all employees who are affected by COVID-19 up to 80 hours of paid sick time for full-time workers. The amount of paid time for part-timers would be based on the amount of time they typically work during a 2-week period. The time would be available for all employees, regardless of how long they have been employed.

A summary of the first version of the bill from Funk and Susan W. Kline, also an attorney at Faegre Drinker in Indianapolis, Indiana, says the 2 weeks of paid time would be available:

Employers also would be required to post notices explaining an employee’s right to paid sick leave.

Employers would not be able to compel employees to use other paid leave before using the paid time granted by the Act. Also, employers wouldn’t be able to require employees to find a replacement to cover time taken because of the Act. Employers also would be prohibited from taking disciplinary action or discriminating against employees who take leave under the Act.

Though the time-off provisions of the bill largely track the Family and Medical Leave Act (FMLA), there are differences. For example, under the old FMLA, just employers with at least 50 employees are covered.

Also, employees of covered employers aren’t eligible for FMLA leave until they have worked for an employer for at least 1,250 hours. But under the bill, employees would need be employed for just 30 consecutive days with no hours-worked requirement for absences related to COVID-19.

The right to expanded FMLA leave related to COVID-19 would expire on December 31, 2020.

Certain tax credits would be available to help offset the cost of the paid leave requirements. Caps and limits would apply, but employers would be able to file for a refundable tax credit for paid sick or family leave, according to a summary of the first version of the bill provided by Kristin M. Simpsen, an attorney with McAfee & Taft in Oklahoma City, Oklahoma.

Employers would be able to seek a full credit for an employee’s own sickness or self-isolation and a lesser credit when employees have taken time off work to care for a child after a school or daycare closure or for an ill family member, according to the summary.

Failing to allow employees to take paid sick leave under the Act would be deemed a violation of the Fair Labor Standards Act (FLSA), according to the summary. An employer that willfully discriminates against or retaliates against an employee would be subject to the penalties for lost wages, an equal amount in liquidated damages, attorneys’ fees, and costs, according to Simpsen’s summary.

Employers may be wondering how they will know what to do once a bill is finalized. Simpsen says they will need to monitor developments. The original version of the bill gives employers 15 days to be in compliance after passage, she says. “Employers should consult with their employment counsel for assistance in revising policies and posting necessary notices.”

Violations of any bill eventually passed will be deemed FLSA violations. Also, employers could face complaints to the U.S. Department of Labor.

The original version of the bill includes provisions for the Secretary of Labor to exempt employers with fewer than 50 employees from the FMLA leave part of the bill, but such a waiver would not apply to the paid sick leave.

Employer exemptions would be made only if compliance would jeopardize the viability of the business as a going concern, Simpsen says. The bill doesn’t provide guidance on how lenient the Labor Secretary will be.

Glianny Fagundo, an attorney with Taylor English Duma LLP in Atlanta, Georgia, says she’s heard of employers trying to lay off or furlough employees to get ahead of the bill’s requirements. But she says most employers are shedding employees because of reduced business, not because of the bill.

Whether employers implementing layoffs and furloughs face legal liability is uncertain. Fagundo says it would be hard for employees to claim retaliation under the FMLA if they haven’t exercised or attempted to exercise an FMLA right, especially one that doesn’t exist.

“Layoffs will eliminate duties under the bill, since the employee will no longer be employed,” Fagundo says. “It is unclear if someone who is furloughed will be entitled to benefits. The bill is silent as to that. The bill contains certain funding for state unemployment departments, which should help those making claims after their terminations.”