We’re taught from a young age to “never give up” and “stick with it” and that “when the going gets tough, the tough get going.” In many circumstances, this is sound advice. Unfortunately, sometimes doing what needs to be done can be difficult, stressful, time-consuming, and miserable. And, in fact, maybe that traditional advice isn’t appropriate in every situation. 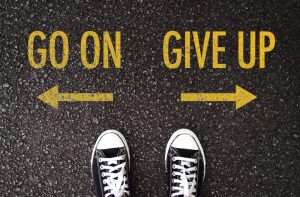 Are there times when it’s OK to give up?

The mantra about never giving up is, in truth, applied through a simplistic lens, with tunnel vision focused on a singular purpose that needs to be accomplished. The key element here is “needs,” the necessity of the task. If, indeed, a task truly is necessary, then the encouragement to push through and never give up is likely sound advice.

In the real world, however, things are rarely so cut and dried. We have competing priorities and alternative options, as well as different means to achieve the same or similar ends.

A Sound Example of Giving Up

In an article for Forge by Niklas Göke titled “The 3 Rules for Dropping Projects,” the author discusses his own experience with abandoning a project he had worked hard at. “I canned my newsletter because after going hard at it for six weeks, it amounted to 1% of my annual income while taking 50% of my time,” he writes. “It was obvious it wasn’t working because even a 10x improvement wouldn’t have made a big enough difference. A book, meanwhile, is about the scariest project any writer can tackle. There’s never a guarantee it’ll sell, especially if it’s your first one—but it might. When your alternative is continuing to spin your wheels, it shouldn’t take much to convince you to try something new.”

Göke’s example is a great illustration of the concept of trade-offs.

Humans don’t have unlimited resources (time, money, energy, personnel, etc.) to pursue as many projects as they want indefinitely. It’s not necessarily a matter of will or hard work but often a matter of choosing the most efficient and effective option from a number of available options. Would we call someone lazy who gives up on his or her efforts to climb up a rocky slope with heavy vegetation and poor footing in favor of a smooth path a few feet away leading to the same summit?

The guidance to “stick with it” and “never give up” is not universally valid. In some contexts, abandoning one course of action in favor of another, possibly more effective one is the right move. It doesn’t mean the person changing approaches is lazy or lacks resilience; it simply means he or she is investing finite resources in the most profitable investment.