They got me. I resisted as long as I could. Over the past year, numerous friends told me I should be watching Ted Lasso, extolling the virtues of this new show airing on Apple® TV+. I wasn’t interested. Frankly, I’m not big into soccer. (Sorry to all the soccer fans out there.) Also, while I find some of his work funny, Jason Sudeikis has never been must-see to me. (Sorry also to all the Jason Sudeikis fans out there.) But there I was one quiet night during vacation over the summer with my family, with the kids all finally asleep, and my wife suggested we give it a shot.

Now I’m on the bandwagon. 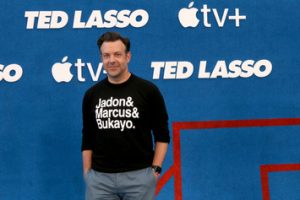 Ted Lasso revolves around an American college football coach, of course named Ted Lasso and played by Jason Sudeikis, who accepts an offer “across the pond” to coach a professional soccer team called AFC Richmond. (Note: While I recognize that most of the world calls it football, my American-centric brain will, for the purposes of this post, continually refer to the game as soccer, so apologies in advance.) Who in their right mind would hire Ted Lasso to coach a professional soccer team with his credentials, or lack thereof, and why would Ted accept? Well, I don’t want to spoil that, but it’s safe to say the show addresses these unique circumstances. And of course, there are a variety of other plotlines involving superbly crafted characters, including, but not limited to, AFC Richmond’s owner, Rebecca Welton; my man with the NSFW language, Roy Kent; and the effervescent Dani Rojas (“Football is Life!”).

Certainly, the American “out of his element” in England is rife with comedic possibilities, but the real reason Ted Lasso has caught on with audiences is its heart. In fact, some have complained that season two, which is currently airing, is a bit too saccharine, causing the show to become annoyingly positive and cheesy. While I can understand that sentiment, I also think these complaints are a byproduct of the weekly airing format, which allows viewers to vent in real time rather than bingeing the season as a whole.

Regardless, no one can dispute that one of the main reasons Ted Lasso became a hit was that it was, and is, a heartwarming show. In this era of antiheroes, and superheroes, and in a time when we are used to seeing negativity in the news (exacerbated, of course, by the current pandemic), viewers welcomed a television show that made you feel good, made you laugh, and involved characters who treated each other with respect and empathy.

Ted is portrayed as an excessively upbeat and positive personality, using humor and understanding to win over his players, the team’s owner, and his colleagues. Essentially, he takes the notion of killing them with kindness to a whole new level. While everyone is complicated, and the show explores the impetus behind Ted’s approach on life, outwardly, Ted’s heartwarming interactions with others soon permeate the workplace, affecting each person within Ted’s orbit with goodwill.

One of the seminal scenes from season one of Ted Lasso involves a high-stakes game of darts between Ted and the ex-husband of AFC Richmond’s owner, Rebecca. During this scene, Ted spouts out a memorable monologue about being underestimated his whole life, anchored by a quote that he remembered as a child: “Be curious, not judgmental.” Believe me when I say that if you watch this one clip on YouTube and don’t have any emotional reaction whatsoever, then you must not have a soul.

Now usually, this is the part where I introduce a new trend in employment law or a specific and recommended compliance action item and tie that to the above pop culture reference. But in the vein of Ted Lasso, I’m going to keep it upbeat; simple; and, yes, saccharine—just this time.

While Ted Lasso is a show about many concepts, one of the main concepts is to be curious, not judgmental, and part and parcel of this is to show empathy toward others. While this show specifically revolves around a professional soccer organization, the relationships are akin to your standard workplace setting with coworkers, superiors, and owners. The open communication and caring shown by these individuals toward each other help elevate them to do their job and to be committed to the organization as a whole.

These same concepts exist in any workplace setting. Particularly in these difficult times, with bottom-line business objectives and fast-paced conditions, we tend to forget that it is people doing these jobs and that people are motivated by a variety of reasons. One of these reasons is a connection to others within the workplace, a feeling that the person to the right or left of them cares about their success. The most successful organizations are those that thrive due to the dedication of the workforce that supports it. Getting this sort of buy-in is difficult, particularly with those businesses with a large number of employees, but I can guarantee you that Ted Lasso wouldn’t shy away from that task. In fact, as Ted would say, “Taking on a challenge is a lot like riding a horse, isn’t it? If you’re comfortable while you’re doing it, you’re probably doing it wrong.”

So take on that challenge. Be curious, not judgmental. Show empathy and positivity. Have your workforce do the same. These ideas may sound amorphous or unattainable, but if you believe they will make a difference, then work toward that goal. As Ted humorously responded when asked whether he believes in ghosts, “I do. But more importantly, I believe they need to believe in themselves.” I think those of us who aren’t ghosts could use some of that belief, as well.