As a southerner raised in Alabama, a “come to Jesus” meeting is the equivalent of a root canal: something you might truly need but would much rather avoid. 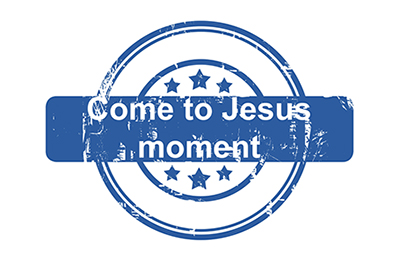 If you’re not familiar with the phrase, it means to have an important and frank, but often difficult, conversation with family, friends, or colleagues to address a problem and devise a solution. Outside the religious context, a “come to Jesus” moment essentially means coming to a powerful realization in order to drive a change in behavior.

The New York Times best-selling author Brené Brown jokes about having a routine “come to Jesus” moment with her husband before every vacation during which they face hard facts like “There’s no way you’re going to read five books on a vacation to Disney World,” and therefore, there’s no point in dragging them along. Some “come to Jesus” issues are a bit more difficult to swallow, but it’s necessary to face the facts in order to have the best-possible outcome.

Why ‘Come to Jesus’ Doesn’t Work at Work

In the workplace, a “come to Jesus” meeting often only takes place when an employee’s behavior or performance has become so problematic that management is at a crossroads: There must be immediate improvement or you’re fired.

By this point, a “come to Jesus” conversation actually compounds the problem rather than fixes it. If you’re ready to lower the boom with an employee and issue an ultimatum (“Either this gets better or you’re out of here”), you’re sabotaging any chance for recovery.

Why? Either the employee has no idea the behavior is an issue, so he or she naturally goes into panic mode when his or her livelihood is threatened without warning, or the employee is aware of the issue but hasn’t fully grasped the severity. This happens when managers struggle to give corrective feedback, despite research that shows employees actually prefer negative feedback over praise or recognition.

In either scenario, this conversation makes the problem worse for three reasons:

I’ve seen this last bulletpoint firsthand with a product manager who was not well liked by his engineering team. Leadership discussed the situation frequently behind closed doors, and at one point, a VP of engineering joked, “Please don’t inflict [the product manager] on us!” Everyone laughed, but it exposed a hidden truth: The product manager had no idea his team didn’t like working with him until he was passed over for leading a new project, forcing a “come to Jesus” chat about his behavior with his boss.

When employees have to rely on a “come to Jesus” discussion to get the full picture of their esteem with management, it completely erodes their trust in leadership. If your manager says you’re doing fine, what does that even mean? Can you truly believe him or her? Or is your manager waiting to drop a bomb on you unexpectedly?

Instead, Come to the Table with Empathy and Solutions

As leaders, we must do better by our employees and give them the feedback they crave (both positive and negative), along with the opportunity to improve behavior before it reaches the point of no return. Here’s how:

Be proactive. Talk with your employees in the moment as soon as undesirable behavior occurs. Help them to recognize it immediately, and discuss ways to modify the behavior in the future.

For example, if an employee is known for derailing meetings, talk with the person before the next meeting, and provide coaching in better group dynamic strategies. This is more effective in motivating him or her to improve because it demonstrates that you are invested in the employee’s growth and development.

Be transparent. Help employees understand their esteem with their team, their peers, and leadership. It can be tough to convince someone to change behavior when you only have one data point, even as the person’s manager.

But, collecting multiple perspectives from a variety of viewpoints can demonstrate consistent themes that clarify and confirm the scope of the issue. With a more thorough perspective, you can move past convincing an employee of the problem and instead focus on helping him or her solve it.

Make sure they’re getting the message. A “come to Jesus” chat might seem appropriate if you feel you’ve brought up an issue many times but haven’t seen a change in behavior. While it can be tempting to up the stakes to get a reaction, remember that this is people’s livelihood on the line—how they pay their rent or mortgage and how they put food on the table. Very few people are willing to risk that, so it’s extremely unlikely they’re ignoring you. It’s better to assume the message just isn’t getting through.

Remember: You’re probably more uncomfortable giving negative feedback than your employees are receiving it. Think about how you’ve approached the issue previously. Did you downplay the situation to avoid upsetting them or hurting their feelings because YOU were uncomfortable?

If so, devise a strategy to revisit the issue. Take time to write out what you want employees to take away from the conversation, and at the end of the conversation, ask them to repeat the message from their perspective to make sure you’re both on the same page.

The harsh reality is that if it comes to the point when a “come to Jesus” chat feels like the only option, it’s likely not a failure on the employee’s part—it’s more likely a management failure.

A “come to Jesus” talk doesn’t put employees on a path to improve. Instead, it forces them to work in the dark regarding their performance and in fear of being called into the office like a child. This can drive great employees out the door and send productivity and morale into a sharp downward spiral.

Giving employees the proactive, comprehensive feedback they need to do their best work for themselves, their team, and the company is one of the most important responsibilities of business leadership. If you’re routinely avoiding those conversations, maybe it’s time to have a “come to Jesus” moment with yourself.