Life may be a meme—or at least it may seem that way sometimes, especially after a meme embodying intergenerational conflict recently worked its way into arguments in an age discrimination case before the highest court in the land. At oral arguments in Babb v. Wilkie, Chief Justice John Roberts asked one of the advocates if using the phrase “OK, Boomer” during the hiring process was age discrimination. 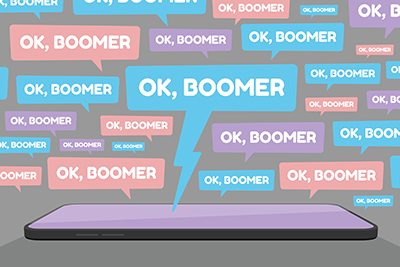 Dismissive Attitude May Not Be Easily Dismissed

According to Merriam Webster, a meme is “an idea, behavior, style, or usage that spreads from person to person within a culture [or] an amusing or interesting item (such as a captioned picture or video) or genre of items that is spread widely online especially through social media.” A meme that has joined the cultural zeitgeist in recent years, “OK, Boomer” is essentially a dismissive response by Millennials or members of Generation Z (also known as Zoomers) to Baby Boomers.

One use of the meme that could be an issue for employers might go something like this:

Baby Boomer employee: “In my experience, the customer is always right.”

The case before the Supreme Court, from the U.S. 11th Circuit Court of Appeals—which covers Alabama, Florida, and Georgia—involves a claim of discrimination brought by a federal employee under the Age Discrimination in Employment Act. The chief justice’s question and the resulting Supreme Court opinion may shed light on what age discrimination looks like in our evolving workplace.

“OK, Boomer” has become a rallying cry for Millennials and Zoomers rejecting what they perceive to be Baby Boomers’ outdated ways of thinking. For instance, a Millennial lawmaker somewhat famously responded with the phrase in 2019 as she was being heckled by an older member of the New Zealand Parliament during a speech on climate change.

But what’s amusing when it’s shared in Internet chat rooms or with friends over iMessage obviously may not be as funny in the workplace. The use of a phrase like “OK, Boomer” at work could very well be deemed evidence of age bias.

Memes may seem funny and lighthearted online, but tolerating the sentiment behind them in the workplace can lead to claims of a hostile work environment or questions about the motivation behind an employment decision.

An employee who files a discrimination claim typically must establish her supervisor’s motivation for taking the challenged employment action. Rarely is there direct proof of discriminatory motivation, but the derisive use of memes may be evidence that’s particularly hard for an employer to rebut.

Employers should be cautious of how changes in culture and attitudes can influence workplace norms and behavior. Be aware of the need to update your discrimination and harassment policies and training to reflect those changing norms. Ideally, being proactive will mean your organization never has to explain why a manager or an employee used a meme that suggests there’s some bias in your workplace.

Jeffrey D. Slanker is an attorney at Sniffen & Spellman, P.A., in Tallahassee, Florida. He may be contacted at jslanker@sniffenlaw.com.