The season may have changed to fall, but the punishing summer heat can be expected to linger longer in many places around the country. Plus, indoor workplaces often pose heat risks year-round. That’s why the U.S. Occupational Safety and Health Administration (OSHA) has announced new measures aimed at reducing heat dangers in workplaces. 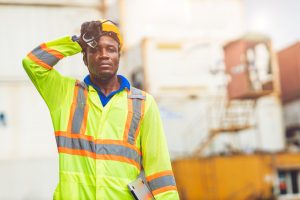 OSHA announced on September 20 that it’s implementing an enforcement initiative on heat-related hazards and developing a National Emphasis Program (NEP) on heat inspections. An NEP is a temporary program that focuses the agency’s resources on particular hazards and high-hazard industries. It uses information from the inspections as well as injury and illness data and other sources to develop NEPs.

In addition to the enforcement initiative and the NEP, the agency is launching a rulemaking process to develop a workplace heat standard.

The specifics haven’t been announced, but it’s not too soon for employers to plan for compliance. Jodi R. Bohr, an attorney with Tiffany & Bosco, P.A., in Phoenix, Arizona, says employers should be prepared for OSHA’s new initiative to conduct planned and surprise workplace inspections. She says the inspections can be expected on days when temperatures exceed 80 degrees.

In many places around the country, high temperatures occur much of the year. For example, Bohr says in 2021 her city—Phoenix—has seen more than 170 days of temperatures 95 degrees and above.

Regarding a timetable for implementation of a new heat standard, Bohr says OSHA is expected to publish an advance notice of proposed rulemaking in October.

The new measures are likely to affect more employers than may be obvious. “In addition to the obvious positions such as construction workers,” Bohr says, “warehouse workers, and certain manufacturing positions are at risk, as they work in environments that are not typically climate-controlled.”

Bohr advises employers with workers facing heat risk to provide them with cold water and encourage them to drink before they are thirsty. Also, if possible, employers should provide shaded or air-conditioned break areas and offer frequent rest periods.

Also, Bohr advises being flexible with work schedules, allowing the more physically demanding work to be done during cooler times of the day.