We all talk about company culture and have a general sense of what it is, but coming up with a clear definition can be difficult.

Some will describe culture as the personality of an organization or the way people interact and relate to each other. Others think culture means the shared beliefs and norms that guide how a group operates. 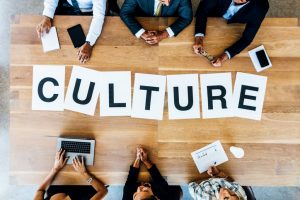 This is my definition of culture: the commonly held set of values and principles that show up in the everyday behavior of the people.

The first part of that definition focuses on the fact that it’s commonly held. In other words, the culture isn’t necessarily what the leader says it is or what he or she wishes it were. Rather, it’s the way most people in the group actually think, believe, and behave.

The second part of the definition suggests that the culture is rooted in behavior. Regardless of what people say they value or believe, what actually shows up in their behavior is the best indication of the true culture. We’ve all seen companies with beautiful posters that articulate their “core values,” claiming these words and presentations are their culture even though the behavior of their team members suggests the culture is something far different.

Losing Control of Your Culture

Every organization has a culture. Whether you’re a customer or a new employee, as soon as you walk into a business or even call a company, you get a feel for what it’s like. Are people friendly? Is it neat and organized or dirty and messy? How do people relate to each other? How do they relate to a stranger?

It’s interesting how cultures form in all settings in life—among friends, in classrooms, on a sports team, and especially in business. In every group, there tends to be one or more people who have a stronger personality than the others. They’re natural leaders. By the energy of their personality, they usually have a disproportionate amount of influence over group norms.

Here’s the main point I want you to consider: If, as a business leader, you’re not purposely and intentionally creating the culture you want to have, it’s going to be created anyway and mostly influenced by those with the strongest personalities. If those people happen to be hardworking, quality-oriented, enthusiastic people, everything will work out fine.

But what if they’re not?

What if they’re sarcastic, cynical, lazy jerks? You guessed it: They’re going to influence those around them to be more like them. I’m sure you’ve seen this many times. They may not be purposely trying to ruin your organization, but they’re doing it just the same.

As many workers flee their current jobs, burnout and lack of growth opportunities are being cited as two of the biggest reasons. These changing work dynamics and employee perspectives, caused by the COVID-19 pandemic, are highlighting the importance of having a strong work culture that’s sustainable. But unfortunately, while business leaders often talk about culture, many don’t have a systematic process in place to build and maintain that culture like they do for other important aspects of their business.

Because culture is such an enormous factor in any organization’s success, should we just leave it to chance and hope the right people are going to influence it? Of course not. It’s simply too important to allow it to emerge on its own and follow its own path. Instead, as leaders, we should be systematic in our approach to culture. Leaders should be as process-oriented about their culture as they are about their sales, finances, and operations. Leaders should create the culture they want rather than live with the culture that emerges by default.

So, how do you do it? Here are some steps I’ve found successful for designing and driving company culture:

Most leaders think of culture as something that happens on its own. It’s never occurred to them that they can be as intentional and systematic about culture as they are with the rest of their business. And in these changing, challenging times, more are beginning to see how important it is.

David Friedman (www.culturewise.com) is author of “Culture by Design: How to Build a High-Performing Culture Even in the New Remote Work Environment” and founder and CEO of CultureWise, a turnkey operating system for small to midsize businesses that helps them create and sustain a high-performing culture. He is the former president of RSI, an award-winning employee benefits brokerage and consulting firm that was named one of the best places to work in the Philadelphia region 7 times. Friedman has taught more than 6,000 CEOs about work culture and led more than 500 workshops on the subject. With Sean Sweeney, Friedman formed High Performing Culture, LLC, based on the culture methodology Friedman created at RSI.