Most employers are equipped to respond to employee allegations of harassment by coworkers or managers. There are added levels of difficulty, however, when they complain about harassment by a customer, contractor, or other visitor to the business. A federal court of appeals recently ruled a Harrah’s Casino employee can go to trial on her claims that (1) she was sexually harassed by a customer and (2) the employer didn’t take sufficient steps to address her concerns. 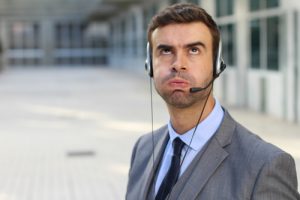 Kristina Sansone was a dealer at a Harrah’s Casino in Louisiana. She alleges a customer made “sexually charged gestures, remarks about her appearance, and sexual propositions” to her at least two times a week over a series of months. She complained to the floor supervisors but was told to ignore the behavior and that “this comes with the business.”

Eventually, Sansone filed a written complaint with Harrah’s. The casino then attempted unsuccessfully to identify the customer from surveillance video and relieved Sansone from her table on the one occasion when he reappeared there. Shortly thereafter, she was terminated for unrelated reasons.

Sansone sued Harrah’s in federal district court alleging retaliation under Title VII of the Civil Rights Act of 1964, a hostile work environment, disability discrimination, and related state law violations. The district court granted summary judgment (dismissal without a trial) to the casino on all of her claims.

Sansone appealed the decision to the U.S. 5th Circuit Court of Appeals, which recently affirmed the dismissal of all of her claims except the hostile work environment charge. The court said a jury could conclude the customer’s alleged conduct was severe and pervasive enough to support a sexual harassment claim.

The court also found a jury could decide Harrah’s had failed to take sufficient action responding to the complaint. The finding was based largely on Sansone’s allegation that (1) she had complained to the floor supervisors and (2) no action had been taken as a result. The court rejected the casino’s argument she should have taken her claims directly to the HR department. Sansone v. Jazz Casino Company, LLC (Sept. 1, 2021).

Sansone’s case illustrates some of the unique difficulties employers face in responding to claims of harassment by customers or other nonemployees:

First, customer harassment cases pose challenges in the investigation stage. Unlike managers or coworkers, customers often aren’t readily available for the employer to interview during the probe.

Second, customers and other third parties aren’t subject to clear written rules and stated expectations like those that typically regulate employees’ conduct in the workplace. It can be difficult to identify and control the future behavior of customers who have improperly harassed employees.

Finally, employees may be less likely to complain about customer conduct because of concerns the employer will be unwilling to take action or even angered at the prospect of damaging public relations. A concern about customer relations would be no defense for an employer’s failure to properly investigate and take action responding to a harassment claim.

Even so, concerns about customer relations could have an impact on an employer’s willingness to give credence to an employee’s complaints, investigate thoroughly, and take prompt and effective action.

Despite the challenges, here are some best practices for limiting the risk of customer harassment and improving employer defenses if it occurs.

Personnel policies. Examine your workplace policies prohibiting harassment and make certain they include harassment by anyone in the workplace, including customers, contractors, and other visitors. Your policies should encourage employees to complain about misconduct by third parties and assure a prompt investigation and appropriate corrective action. Stress the points during employee training about your harassment policies.

Supervisory training. When training managers, you should include the possibility of misconduct by customers and other third parties. Frontline supervisors can be a valuable asset for preventing harassment by customers and other visitors. Often, they are in a position for diplomatic intervention to prevent or deescalate the behavior.

Be sure managers are aware of their responsibilities to relay employee complaints about customer conduct to upper management and HR, just as they are supposed to do for similar behavior by coworkers.

Attempting to prevent and deal with complaints about customer or other third-party harassment can be a real challenge, particularly when credibility issues arise during the investigation. Adopting a few common-sense practices and policies can greatly improve the likelihood you will have a better defense.

Mike Underwood is a partner in the Columbus office of Porter Wright’s labor and employment law department. You can reach him at munderwood@porterwright.com.