In honor of National Boss’s Day, I decided to devote this post to the most colorful boss I could think of: Nandor the Relentless from What We Do in the Shadows. I got hooked on this show after my brother aptly described it as “like The Office but with vampires in Staten Island.” This comedy series follows Nandor, his vampire roommates, and his familiar/body guard named Guillermo as they try to navigate the modern world with varying degrees of success. While Boss’s Day is intended to celebrate those hardworking bosses out there who go above and beyond for their employees, Nandor hardly fits the bill. 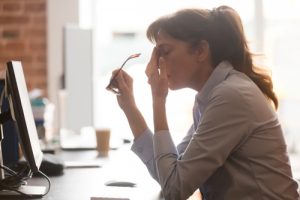 Instead, he spends much of his time fondly reflecting on his days as a bloodthirsty leader and warrior in the Ottoman Empire and stringing the unpaid Guillermo along with vague promises of turning him into a vampire one day. However, during a recent episode entitled “The Wellness Center,” we see a very different and more sensitive side of Nandor. While the group is excited to celebrate Nandor’s “Accession Day” (the anniversary of his becoming the Supreme Viceroy of his home country), they are dismayed to discover that Nandor is battling depression.

While many employers now offer employee assistance programs (EAPs, i.e., an employer-sponsored work-based intervention program designed to provide support to employees struggling with a wide range of issues, including mental health issues) and train managers on employers’ obligations under the Americans with Disabilities Act, the Vampiric Council is behind the times.  Instead, Nandor’s fellow council members attempt to distract him from his mental health crisis by assigning him the supposedly important task of collecting past-due council fees from local vampire Jan.

To Nandor’s surprise, Jan has been running a vampire wellness center (actually a cult that seems to draw loose inspiration from the 1980s’ jazzercise craze) for the “Formerly Fanged,” who wish to become human again. In his vulnerable state, Nandor is sucked in by Jan’s charisma and promises of a new life while ignoring some very clear warning signs. Guillermo, ever the devoted employee, goes to check on Nandor and conducts a much-needed intervention and daring rescue mission.

Nandor may not be the easiest boss to work for, but this episode really highlights the genuine affection that Nandor and Guillermo share. It also illustrates the fact that mental health issues can strike anyone, even Nandor the Relentless, so lavish the ones you love with abundant praise and affection. Happy National Boss’s Day, and here’s hoping that your own work duties are a bit less perilous than Guillermo’s!