Paris Wallace says he’s been an entrepreneur his whole life, and he’s passionate about lowering the barriers that keep others from the success he’s enjoyed. As CEO and cofounder of Ovia Health, a family health benefits platform based in Boston, he’s eager to hire smart, creative, innovative, capable people. But he’s quick to say they don’t need to be college grads. In fact, he’s dropped degree requirements for positions at his company. 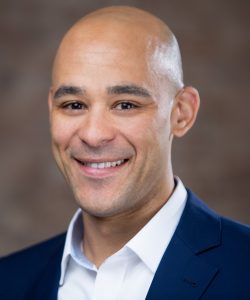 Wallace certainly doesn’t frown on a university education. In fact, he holds two advanced degrees from Harvard University: a master’s in business administration and a master’s in public administration. His undergrad degree is from the equally elite Amherst College. But he doesn’t fit the mold of an alumnus of such prestigious schools.

“I have a very humble background,” Wallace says, adding that he was raised by a disabled, single mother. Despite the hurdles he had to clear, he says he was “lucky enough to transcend my background.”

Wallace says that too often, people need to go to prestigious schools in order to get into certain organizations, raise venture capital, or become partners at big firms. And those schools can be “incredibly biased in the way that they accept their students.”

Wallace jokes that the people at Harvard Business School are from “20 ZIP codes, 10 prep schools, five colleges, and four companies,” meaning opportunities are limited for people outside of that world.

“I always give the example, if you say, ‘Hey, there’s 100 spots in this school’ and 99 are taken by alumni’s kids, and there’s one spot that’s open to everyone else, that is not a meritocracy,” he says.

So, Wallace set out to lower barriers and create more of a meritocracy “because if you just think about the simple bell curve, what are the chances that all the smart people are in the top 1% or 10% of the country? It’s just impossible. It’s statistically impossible.”

That’s why Wallace says employers that struggle to find talent need to remember that not all the smart people are in the top 10% socioeconomically. “That 10% probably has 90% of all the high tech jobs and leadership roles.” That means employers are missing a lot of talent. “Not only is it unfair, but it’s not good for business.”

To combat the problem, Wallace asks himself: “OK, who are the kids like me? Who are the young people getting started? Who are the people in the middle of their career that did not have the opportunity? I think I received over half a million dollars in financial aid across my education, maybe more than that. Who didn’t have that opportunity who’s just as smart but didn’t get that chance because there’s only one kid per class that’s going to get that?”

Being able to provide opportunities is motivating for Wallace, but he doesn’t want his no-degree-required policy to benefit just the people who can’t go to elite institutions or even attend college at all.

“It’s like you can’t look at it as giving an opportunity just to the person who you’re bringing in who maybe otherwise wouldn’t have had that opportunity,” he says. “You’re giving the opportunity to the rest of the organization – to everyone who’s going to have the pleasure to interact with those folks and to really have their world expanded.”

Wallace calls that diversity in education “a tremendous gift” that makes an organization “one where people want to be because they’re going to have that opportunity that they wouldn’t have at other organizations that are more narrow-minded about these things.”

Wallace says he did research and found that by having degree requirements, “you’re cutting out 70% of African Americans and 80% of Latinos and rural employees.” So, he originally was motivated to institute his policy in an effort to boost diversity and equity.

But the decision also led to a way to overcome the skills gap so many employers see. “I would say that we originally approached it really on the diversity and equity side and then realized that it was a great way to really find pockets of talent that were available and that we could train,” Wallace notes.

In a fast-growing company like his, “where you’re inventing the future every day, there’s no playbook,” he adds. “So yes, there’s a basic level of skills that people need, but that’s something we can train people.” He also sees a “real advantage to folks who maybe don’t have the classical training who will look at problems at a very different way and think through them.”

Lexi Kantor, Ovia Health’s people’s operations lead, has seen the policy pay off. Because of the policy, “we’ve actually been able to hire some really awesome software engineers.”

“The reason for that, I think, is you no longer need a college degree in order to learn the skills that it takes to become a software developer,” Kantor notes. There are some people who have joined the company from hourly jobs because they wanted to make a career change, and there are others who have gotten into tech after taking a boot camp because college just wasn’t for them. Instead, “they just took a quick, intensive course and it set them on their path,” she says.

The no-degree-required policy “has really opened up a ton of opportunities for us to hire great engineers in a market where everybody is looking for engineers,” Kantor adds.

Being in the Boston tech scene, Kantor says “there’s always going to be work to do” on diversity, but the policy has “increased our racial diversity a little bit, and it’s also increased our diversity of perspectives.”

Kantor cites as an example someone who came from a background in teaching and public service, and the way she approaches problems “is so much different from the way that maybe an MIT grad might approach a problem.”

Wallace says the paychecks for the degreed and non-degreed employees don’t look different. Instead, the pay scale is transparent and equal for each person at each level.

“Essentially, if we think you’re qualified for the job and you’re doing a good job, we’re going to pay you the same as anyone else in that position, regardless of any factor,” Wallace says.

That philosophy is key to the company’s diversity and equity efforts. It ensures the structure is in place to make sure pay is equitable across the organization.

“All these different groups, it’s the same policies, it’s the same orientation, it’s the same culture that make you welcoming and make you a great place to work,” Wallace adds. “And a place where people of color and women and people without degrees and rural folk and all these folks that have been kept out of the workforce can thrive.”