Connecticut’s minimum wage will increase on October 1 as the state begins a series of hikes that will eventually make the state’s minimum $15 an hour. 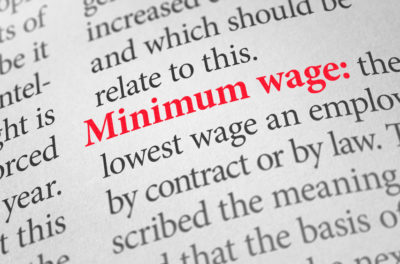 The increases will be phased in on the following dates:

After the $15 level is reached, the state’s minimum wage will be adjusted based on the employment cost index, a federal figure that measures the cost of labor in certain businesses. Those adjustments, however, cannot lower the minimum wage below $15 an hour. The adjustments also can be suspended if the state’s economy does poorly.

The new law doesn’t change those minimums—at least for now. Instead, it increases the tip credit as the minimum wage rises over the next few years. So, a restaurant, hotel, or bar may not have to increase what it pays its tipped workers if those tips are enough to ensure the employee earns the minimum wage.

The new law also changes how teens can be paid. Before the new law, employers could pay employees under 18 about $8.59 an hour for the first 200 days on the job. But going forward, workers under 18 will have to be paid $10.10 an hour for the first 90 days of their employment. After that, they must be paid what the minimum wage is, which will be at least $11 an hour starting October 1.

Brendan N. Gooley is an attorney with Carlton Fields in Hartford. He can be reached at bgooley@carltonfields.com.