Traditionally, the education-to-labor-force pipeline has followed a fairly consistent, one-directional path: Children and young adults work through K–12 education, and then some pursue undergraduate, vocational, professional, and/or graduate-level degrees before entering the workforce. 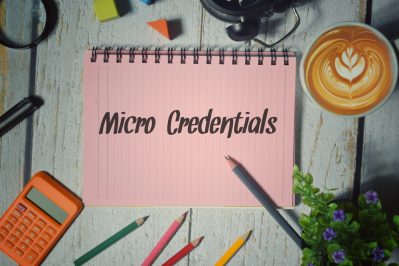 It’s understandable why this trajectory has been so common for most Americans. Once people finish their full-time education and enter the workforce, their lifestyle changes such that they depend on that steady paycheck, as they may have a mortgage and children of their own to support.

When they’re in the workforce, taking time off from a paying job to go back to school full time simply isn’t an option for most, not to mention paying the ever-rising costs of education.

Addressing the Need to Keep Pace

At the same time, the American economy, and the broader global economy in which it functions, is dynamic and fast-paced. New technologies, business strategies, and best practices are constantly emerging and evolving, with old methods and ways of thinking often falling into obsolescence.

Many employers lament the existence of what they see as a critical skills gap in the available workforce. To address the gap, some companies offer employees financial support for pursuing further education. A company-sponsored part-time MBA program is a classic example. Still, not all employees have enough time to take on a rigorous graduate-level degree while working a full-time job, and even when employers help finance additional education, employees often still need to pay some portion out of pocket. Moreover, pursuing a 2-year program like an MBA on a part-time basis can take 3 or more years in many cases.

A Role for Micro-Credentials

Micro-credentials have emerged in recent years as a means of filling the gap between those who can’t afford or can’t find the time to take on a more traditional, multiyear degree and those who choose to simply forego further education altogether.

“The root of the idea is simple,” writes Peter Greene in an article for Forbes. “You demonstrate a very specific skill, and a badge certifying that micro-credential becomes part of your personal digital file. Some of the earliest micro-credentialing involved computer programming skills, but it has grown far beyond that.”

There are a number of platforms offering a variety of micro-credentials. Companies like Khan Academy, Coursera, Udemy, and edX are high-profile examples, offering courses on everything from cybersecurity and finance to cooking, history, and art appreciation. The federal government has even gotten in on the act with the creation of Digital Promise.

“Digital Promise was authorized by Congress in 2008 as the National Center for Research in Advanced Information and Digital Technologies,” Greene writes. “It offers micro-credentials of its own, but it also provides a platform for other entities to offer their own sets of micro-credentials.”

More than 35 organizations are offering micro-credentials through Digital Promise. Greene notes that these include Arizona State University, Teaching Matters, and National Geographic. “In 2017, Digital Promise hosted a Symposium on the Currency of Micro-credentials that attracted over 100 people, representing school systems, state departments of education, and the Institute for Personalized Learning,” he says.

Viewpoint A: Micro-Credentials Serve a Valuable Role in Helping to Fill the Skills Gap for Busy Professionals

For some employers, micro-credentials offer a great solution to the challenge of a dearth of candidates with the necessary skills for promotions or new roles within an organization.

“We mainly use micro-credentials when we have the goal of moving an employee into a higher-up and much more complex position over a certain period of time—especially when we have an estimated time period for the person already in that role to move up too,” says Teri Shern, cofounder of Conex Boxes. “It’s almost like a training program with a number of different levels, ultimately helping the employee to achieve success in multiple areas before finally being ready to take over the role we expect them to.”

Shern adds, though, that “not every employee has the capability of taking over a specific role, which is why we also plan for movement into other areas of the company based on the way they complete each micro-credential stage.”

Viewpoint B: Micro-Credentials Are Largely Irrelevant and a Waste of Time and Money

Not everyone is so high on the value of micro-credentials, however. Many employers remain highly skeptical of this relatively novel and often low-intensity approach to upskilling.

“Micro-credentials are largely pointless,” says Hosea Chang, Chief Operating Officer of Hayden Girls. “The types of skills that these micro-credentials seek to verify are usually aspects of the business world that you learn from on-site training, which is far more effective than relying on a third party to verify these skills,” Chang says.

For example, Chang points to the value the knowledge of a software program, like Excel, might have when making a hiring decision. Having that knowledge could be a plus. On the other hand, says Chang, “I have never thought ‘this is the perfect candidate, I just wish they had an Excel endorsement.’” Chang says he trusts his own ability to properly train employees on “the specific process of work-life at my company.” He says he would “much rather have control over what and how a person is learning when it comes to micro-tasks.”

While Chang acknowledges that it’s always a good idea to have a well-informed and up-to-date workforce, he feels that relying on micro-credentials to steer this process is unnecessary. Instead, he believes “college degrees impart far more than skill-centric, practical knowledge, and are a great barometer for a person’s general motivation and work habits.”

Evidence of Self-Improvement and Work Ethic

Still, some employers, HR pros, and hiring managers find that the actual knowledge and skills gained in the achievement of micro-credentials are just part of the equation when evaluating a job candidate. Candidates are sending a signal to recruiters just by making the effort to better themselves.

“Micro-credentials do help boost a candidate’s chances of getting hired,” says Michael Hammelburger, CEO of Sales Therapy. It shows they have exerted more effort in upskilling to improve themselves, he adds. “If you want to stand out in this critical period of ‘new normal,’ you need to have cross-over skills and these credentials provide you with the skills you need.”

Micro-credentials are a relatively new phenomena, which may be why some employers remain skeptical of their value. Those that do see the value are quick to point out they do not see micro-credentials as a replacement for a traditional degree but rather as an enhancement. Micro-credentials can and do help address a significant skills gap in many organizations. They’re just one more indication of candidates’ potential employers can consider when making hiring and promotion decisions.