Even without the aid of a calendar, there are many signs for casual observers to note the transition from summer to fall: kids going back to school, leaves changing, and, of course, football. While the playing days for those who were ever directly involved in the sport may have long passed for many professionals, millions of Americans enjoy watching the sport each year and millions also take part in fantasy football leagues, “drafting” their own teams and “playing” against other fantasy teams each week. 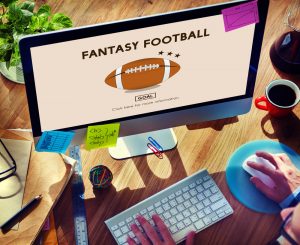 Fantasy football leagues are common in office settings in particular, and this is the subject of this feature. How do managers and other professionals feel about fantasy football leagues in the office? Are they a troublesome distraction? Or do they represent an opportunity to build and strengthen office bonds?

What is Fantasy Football?

For starters, let’s provide a brief overview of fantasy football, as not everyone is familiar with the topic. As Matt De Lima explains in an article for Sports Illustrated, “fantasy football is a game that allows you to be the owner, GM and coach of your very own football team. Competing against your friends, you draft a team made up of NFL players and based on their on-field performance in a given week, you score points. For example, if you have Lamar Jackson on your team and he throws a touchdown, your team scores points. Add up all the points and the team with the most at the end of the NFL week is the winner.”

Building a Sense of Community

The primary aim of an office fantasy football league, like any other workplace social activity, is to promote camaraderie and bonding among colleagues. It can be a great way to network internally and for members of disparate teams to interact and get to know each other.

“I believe that fantasy football certainly has a place at work. Working constantly for long periods of time can result in fatigue and loss of productivity,” says Sally Stevens, HR Manager at FastPeopleSearch. “Fantasy football provides one way for employees to set aside work matters for some time and have fun. Employees can set a special league for themselves and regularly check and compare their scores against one another.”

This, says Stevens, allows employees to bond and develop camaraderie—something that has become even more important during a time of remote work and social distancing.

The Impact on Productivity

An obvious concern from many companies about an office fantasy football league is that participation could create a drain on productivity. Managers certainly don’t want their teams to be spending significant amounts of time at work focused on their fantasy teams.

As with any other productivity concern, it’s important to set expectations early on and let staff know that their work needs to come first and foremost. Companies might also consider policies like reserving fantasy football activities for non-work hours or during breaks.

As mentioned earlier, not everyone is familiar with fantasy football, nor the underlying sport of football itself. After all, football has traditionally been a male-dominated sport and certainly not one played by all men and boys. This lends itself to a legitimate concern that company fantasy football leagues could be less inclusive than other forms of office bonding.

“I’m all about creative ways to increase employee engagement but I don’t think fantasy football is a good way to do it,” says Todd Ramlin, manager of Cable Compare. “I think fantasy football has its place, but that place is not the office,” Ramlin says. “It might be great fun for your team members who are football fans, but it may create stress and anxiety for employees who don’t care for football. Non-football fans may feel pressure to learn about the sport in order to participate or worry about how they’ll be perceived if they don’t participate.”

In addition to fantasy football itself, Ramlin suggests that the underlying sport of football has a complicated image and history.

“Professional football also has a history of being featured in the news for political, social, and culturally divisive issues, and bringing football discussions into the office may bring those issues along as well,” Ramlin says. “If your office has a group of football fans, there are plenty of ways they can play fantasy football together without making it an official workplace activity and plenty of alternatives to fantasy football that are more appropriate for professional team building.”

Marilyn Gaskell, founder of TruePeopleSearch, agrees that not everyone in the office is likely to be a football fan and might feel intimidated by joining a company league or left out if they don’t join; however, her company looked for ways to make the activity more inclusive.

“After we noticed a considerable buzz around the office regarding the Euro Cup, we decided to try and implement a fantasy football league in the office,” she says. “When we floated the idea, a lot of our employees responded enthusiastically but, of course, there were some who had no interest in the idea.” In an effort to engage all employees, the HR team came up with a tutorial on how to draft players and held an after-hours draft party for all employees, including drinks and snacks. “Most of our employees did attend the draft party, even those who had not expressed interest in the idea, and it was certainly a step toward including everyone in the league,” says Gaskell. “We also made the decision to not have entry fees since that would restrict the number of employees who wanted to sign up.”

In addition to finding ways to encourage non-football fans to participate in fantasy football leagues, companies should also think about rewards and incentives for participation. Many fantasy football leagues have a fee for participation with top teams receiving a share of the pot at the end of the league. While this can provide additional incentives to join a league, some companies and employees may be uncomfortable with a cash pool.

Another consideration is whether the organization itself should sponsor a league or whether it’s better to simply allow individual employees to organize leagues that aren’t directly run by the company itself.

Fantasy football is an increasingly popular activity among millions of Americans, and it can provide a great opportunity to encourage bonding and camaraderie among employees. Of course, organizations should consider whether fantasy football is a good fit for their specific company and staff in terms of company culture and the ultimate goal of providing a bonding experience that’s broadly inclusive and not too distracting.