Boomerang employees are those who leave, decide the grass wasn’t greener elsewhere after all, and want to come back. 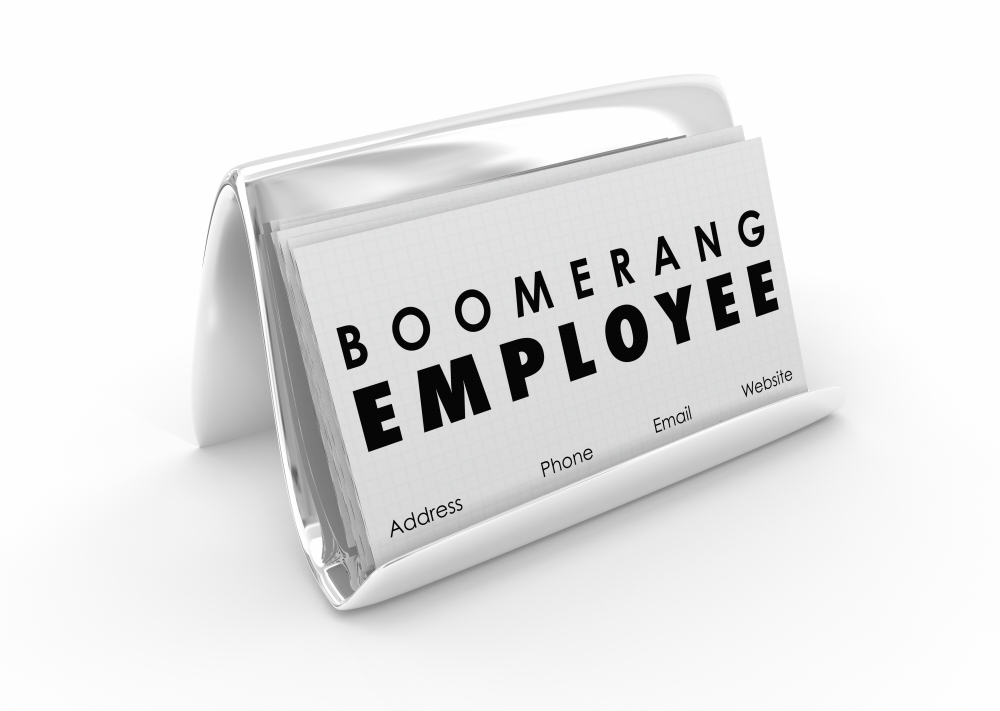 Should you let them? What are the pros and cons of boomerang employees? Do they gain industry, or other, experience that can benefit the company? Could the potential for “bad blood” outweigh these benefits? What is the impact on other employees? Might it make them think twice before looking for another job themselves?

We asked some experts to weigh in. Here’s what they had to say.

There can be some big benefits to welcoming back former employees. Chief among them is that they know the company and the company knows them, says Adrienne Cooper, Chief People Officer for FitSmallBusiness.com. “That familiarity goes a long way in reintroducing them to the workplace,” she says.

That knowledge also means less time will need to be spent on training, says Matt Erhard, managing partner of Summit Search Group, which he feels is a big advantage. “Depending on how long ago they left they may only need a brief refresher and update on policies and procedures.”

In addition, he says, returning employees “can also bring a fresh perspective to the work thanks to their experience working elsewhere.”

And, adds Cooper, bringing a former employee back on board can help with overall retention. “It can definitely make current employees appreciate their jobs more if they hear from someone they still trust that other options are not as great as they seem,” says Cooper.

There are, though, some important drawbacks to be aware of, making the idea too risky for some.

Tim Winkler is CEO of hatch IT, a company that teaches DC start-ups to recruit software engineers. “We’ve seen more cons than pros with this one,” says Winkler. “The fact that the employee left in the first place alludes to something wasn’t pleasing that employee,” he says.

It might be salary, culture, the work the employee was doing, or something else. But, Winkler says, “If that root problem isn’t addressed and they leave and come back, they will still be unhappy.”

From an employer standpoint, the return of a departed employee can also call into question the person’s loyalty, says Winkler. Is there a chance he or she will leave again “if the right carrot is dangled”?

This, says Erhard, is the main disadvantage that he sees. “If they looked for outside employment once, there’s a high likelihood they’ll do it again, and then you’ll be back to square one and hiring to replace them.”

Perhaps the biggest negative potential of boomerang employees is how their return might affect other employees in not-so-good ways.

“It doesn’t really matter how great a person’s skills are if they take everyone around them down,” says Cooper. “There are very few jobs these days in which superstars can perform in isolation.”

Cooper says she has seen these situations have good and not-so-good results. “It’s all contingent upon how the boomerang employee departed and what role they are returning to at the organization,” she says.

Ultimately, says Cooper, decisions about whether to welcome an employee back on board should be made on a case-by-case basis by the manager and the HR team.

“The team would want to consider the reasons the person left, and if conditions have changed that led to those reasons. If they haven’t, then it does not really make sense for even talented people to return,” says Cooper. “They may be seeking out familiarity, but that does not mean they were happy. Ultimately, you could just be reopening the door to the same problem.”

If things have changed, though, or the employee is coming back to a new role in which he or she may utilize the new skills he or she learned while gone, it could make a lot of sense to welcome the employee back on board.

While the decision rests with the managers and HR, other team members’ input should also be sought, Cooper advises. “If the team is not on board with the decision for the person to return, then it creates a very difficult team dynamic.” She suggests considering including team members in a structured interview process so they have input into the decision.

In the first case, she says, “A super employee got a great offer from a close friend. I kept in contact with him, and eventually, he confided in me that he had much more fun and success working with my team and wanted to come back. He said he’d even accept less compensation. I made room for him, and everything worked out.”

The other employee, she says, “came back with his tail between his legs like a wounded animal and begged to come back.” She said no and felt good about it, she says. “I believed he would have spread a negative attitude throughout the team and would always be looking for something else. He was one of those people still searching for something better.”

Ray Zinn, Silicon Valley’s longest-serving CEO—running Micrel Semiconductor, now part of Microchip, for 37 years—believes welcoming boomerang employees back into the fold can be very good for an organization.

He shares, “In Silicon Valley where employees come and go seemingly on a whim and often in droves, Micrel Semiconductor, which I ran for 37 years, had one of the highest retention rehire rates in the valley. For employees who wanted to ‘get out there’ so to speak, they often would quickly become disenchanted, wanting to return. We generally found that these employees appreciated the culture of Micrel even more when they returned and were often the most devoted among our staff.”

Clearly, there is no one-size-fits-all answer to the question of whether to welcome back boomerang employees. It depends—on the employee; on the situation that caused him or her to leave; on how the organization may or may not have changed since the person left; and, as with any hiring consideration, how well he or she will fit back in the fold.

“I think the critical thing to consider with any employee, but especially boomerangers, is their character,” says Staten. “Only allow back those who are humble, kind, honest, forthright, and have a generally healthy perspective on life.”