Tina lied about her college degree, Bob lied about his work experience, and yet your hiring manager still gave them an offer anyway. Where do you draw the line on lying during the hiring process? And how do you make sure your entire hiring team has the same set of ethical standards as your company? 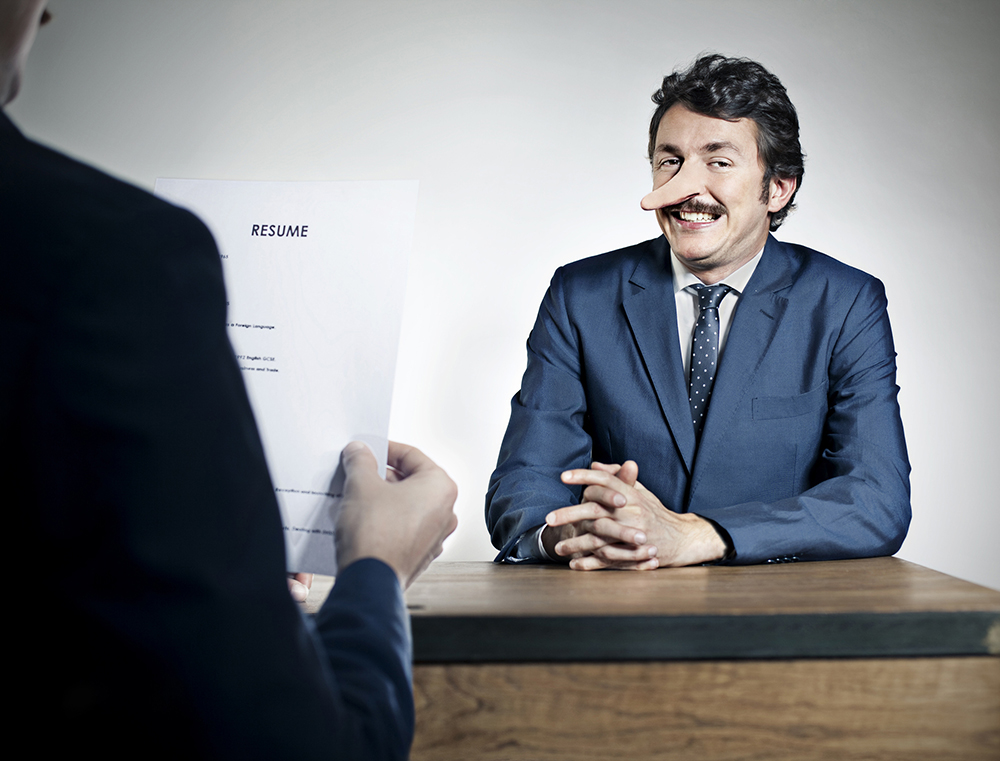 These were just a few questions that were raised in the new Checkster research report, “Is Your Company Hiring Charlatans? A study of ethical standards in the hiring process.” The report features insights from two separate surveys of jobseekers and hiring professionals, and the results revealed that integrity is one of the most important qualities an employee should have, but during the hiring process, it seems like integrity is going out the window.

How Widespread Is Lying?

According to the jobseeker survey, a vast majority (77.6%) of candidates are willing to misrepresent themselves during the hiring process. “Applicants were most likely to report claiming mastery in skills they had no knowledge of (60% claimed they had or would do this at least once) and working at some jobs longer than they had in order to omit an employer (over 50%)—that’s a majority of respondents reporting willingness to misrepresent in these ways,” finds the report.

Some inflated claims jobseekers have admitted to include:

Sadly, Checkster reveals that only one in six employees reported not misrepresenting themselves whatsoever in the application process, meaning most jobseekers lack the integrity employers are looking for. However, are all these lies a result of jobseekers’ desperately wanting to be employed? Should hiring professionals pass over candidates who tell white lies? Where do we draw the line on lying during the hiring process?

“First of all, an individual who said they had exaggerated their Excel skills once is different from an employee who is consistently willing to lie on major issues like criminal background,” suggests Checkster. “And while there may be certain jobs, like a judge or a caretaker of children, where absolute ethical purity is paramount, your company needs to decide what ethical standards are necessary. Secondly, there are important steps that your hiring team can take to guard against unethical behavior.”

And we’ll outline those steps below.

Before we dive into the strategies, it’s worth noting that not everyone on the hiring team shares the same views about what’s ethical and what isn’t. According to the report, 66% of hiring professionals are willing to hire someone despite lying during the process. For example, 92% of hiring pros are able to turn a blind eye to candidates who inflate their GPA.

So, how lenient are your hiring professionals? It depends!

If the hiring landscape weren’t as difficult as it currently is, we’re sure more hiring professionals would be more cautious about who they hire, but sadly, these findings expose how low employers are willing to go in order to fill the void.

If you want to get your hiring team on the same ethical page, Checkster offers some advice. “Ethical alignment is what occurs when the individuals in your company have a clear idea of what is and isn’t okay behavior,” suggests the report. “While some behavior is defined by law as illegal (like discriminating against someone in the hiring process based on their gender or hiring a doctor without proper credentials), most behaviors are in what we call an ethical gray area.”

In order to avoid hiring discrimination and to better understand the “gray” area, you first need to understand what your team considers ethical, and then you must set standards and explicitly communicate these standards among all hiring teams.

You get a sense of what your team considers “ethical” by surveying them. Consider sending out a team questionnaire that asks your employees how they would act in a variety of situations. The answers from the questionnaire will inform you about the areas where employees differ from the company’s ethical standards and will allow you to ensure everyone knows what is and isn’t OK in the hiring process moving forward.

Make sure the questionnaire covers all aspects of the hiring process, from the candidate résumé to the onboarding process; leave no stone unturned! Once your team agrees on what is and isn’t ethical behavior, you’ll be able to draw a firm line in the sand that helps guide your hiring teams to make better decisions.

Getting everyone on the same page is a great place to start, but how can you truly trust the job candidate? This is where technological tools come into play! Here are two examples of tools you should be using.

Reference checks. A candidate gave you a phone number for one of his or her references, but every time you call the number, you get a message saying the number is no longer in service. Did the candidate give you a bogus reference, or is he or she unaware that the reference’s phone number has changed? You can get the answer to this question by using software specifically designed to cross-check a candidate’s reference list to make sure these are legitimate people.

Checkster also suggests making sure you set up clear standards and guidelines surrounding the ethical use of artificial intelligence (AI). “These standards inform the programming and the interpretation of AI tools, as these tools are only as good as the people who create and use them,” says Checkster. “Therefore, intentional conversations about ethical standards are even more important to consider in an age of increasing AI automation.”

In order to get everyone on the same page, there must be a general consensus across all your hiring professionals. Survey your hiring teams to uncover what they think is and isn’t acceptable, and use those responses to generate your standards.

“We recommend utilizing tools such as background checks, reference checks, reference checking fraud software, and reviewing your AI to ensure that your ethical standards are being complied with,” concludes Checkster. “Taking these steps, even in light of a sizable number of inflated claims, will encourage a culture based on your principles and protect your company’s reputation.”